Sinsational night out at Devilles

Josh Collins has brought years of industry experience and a touch of the flamboyant to his themed club in Aberdeen Street. Carolyn Herbert reports. 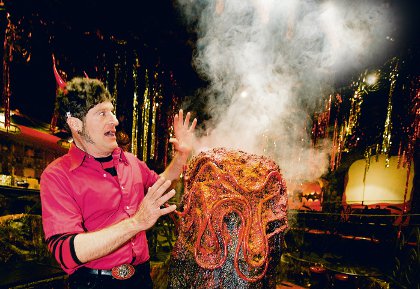 IT’S not often that a Perth nightclub owner will don full make-up and costume to transform himself into various characters, taking on the role of MC, introducing theatrical acts and even working on the decks as a DJ.

But for Devilles Pad owner Josh Collins that’s the routine on most Friday or Saturday nights.

The ‘Sinsational Temple of Kitsch’ as it’s known, opened its doors three years ago and was the second venture for Mr Collins and his wife, Barbara, who started the Hula Bula Bar back in 2003.

Mr Collins formerly worked as a promoter for music festivals around Europe and was responsible for building numerous themed bars in London, before he decided to move to Perth 10 years ago.

His experience in these ‘tiki’ themed bars was the inspiration for the Hula Bula Bar, a 90-patron tropical-themed bar, nestled on Victoria Avenue in Perth’s CBD.

With the Hula Bula Bar busy from day one, Mr Collins already had his next business venture in mind.

“I used to run nights at Margaux’s at the Hilton, and because it hadn’t been done up since around 1979 we came up with the concept of Devilles for the Hilton,” Mr Collins says.

After spending more than a year developing the concept for Devilles, Mr Collins told Gusto management at the Hilton changed its mind on the idea.

“It was too good a concept and we thought ‘let’s just do this for ourselves’, so we did,” he says.

“We wanted to do this very camp version of hell, but it was always tricky on how to do it without being gothic or without it being interpreted the wrong way … but I think Devilles is more like Liberace in hell.”

Finding a location for Devilles Pad was a challenge, but Mr Collins settled on a site at the bottom of Aberdeen Street in Perth.

“I wanted something in the city centre but not Northbridge; Northbridge gets such bad press, it’s just not worth being there,” Mr Collins says.

“But here we have great parking and train access and no neighbours to annoy; we did have some trouble initially at Hula Bula with neighbours.”

From the outside, Devilles Pad appears to be nothing more than an aging building that blends in with the surrounding local businesses.

That all changes when you enter through the doors into a retro playground, complete with a lava-like dance floor, deep red booths and of course, go-go girls in cages.

“It takes people a couple of times to get their head around it and the outside is deliberately quite bland, but if it was crazy outside it would ruin the surprise on the inside,” Mr Collins says.

After experiencing some ‘issues’ with the younger crowd at the Hula Bula Bar, Mr Collins decided to make Devilles Pad an over-25s venue.

“We just wanted to make something that was a bit more glamorous and a bit more relaxed, that wasn’t all flashing lights and people vomiting in the corner,” he says.

“Going back to the olden-day-style nightclub is what we really wanted to achieve and I’m really proud of the mixture of people we get here at the moment. You can have people in their 60s and people in their 20s and they’re all mixing and having a great time.”

The club’s patron policy did get some young people offside, however.

“We had a lovely protest of around 60 21 year olds who turned up a couple of months ago, but they were so badly dressed and so badly behaved we couldn’t let them in,” Mr Collins says.

To offer customers another facet to the Devilles Pad experience, the nightclub has a casual-dining menu comprised of traditional American diner-style cuisine.

“I love the food part of it here, because someone that goes out for a meal is not the person who goes out to get completely tanked,” Mr Collins says.

“And the hospitality industry is no longer about ‘I’ll sell you a drink and I can make some money’; you need to offer people as much of an experience as you can, because people don’t go out to drink, they go out to meet people and they go out to be entertained.”

Compared to Europe, Mr Collins said it was, and continues to be a real challenge to find good hospitality staff in Perth.

“Finding, training and keeping staff is the biggest challenge and WA is really hard,” he says.

“I think that’s because hospitality is not really regarded as a career here, its something that you do when you are at uni, and the people we find are the most career-oriented are travellers.”

With Deville’s Pad up and running, Mr Collins has now shifted his focus to his brand-new tiki bar LuWow, which opened in Melbourne a fortnight ago.

“Ever since I opened Hula Bula Bar I thought someone is going to do a really good tiki bar in Melbourne but no-one ever did it,” he says. “So it had to be done, really, the LuWow is like ‘Tiki with claws’, it’s much more Sinbad, Temple of Doom, Amazon jungle style.”