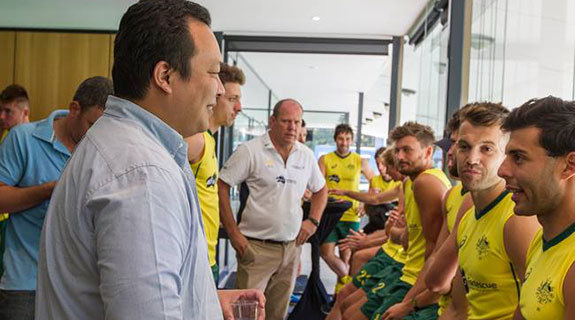 Singapore-based management consultancy firm The Project Group has become a major sponsor of Hockey Australia with a deal that could be worth more than $500,000 if the Kookaburras and Hockeyroos win gold in Brazil next year.

The financial details of the deal signed in Perth were not disclosed but Hockey Australia’s sponsorship arrangements with Fortescue Metals Group was estimated to be more than $250,000 per year, and Singaporean press reports revealed that personal player incentives for winning gold could amount to more than $400,000.

Ausdrill sponsors the Hockeyroos for an unknown amount.

TPG managing director Paul Lim grew up in Brisbane and is a former goalkeeper with the Singapore national team.

As part of the two-year arrangement, the TPG logo will appear on the playing uniform of both teams, which will each hold a training camp in Singapore during the term.

Mr Lim said the move was aimed at exposing his South-East Asian business in Australia, where TPG has recently opened an office in Sydney, as well as helping to expose Singapore to the sport via the world’s best teams.