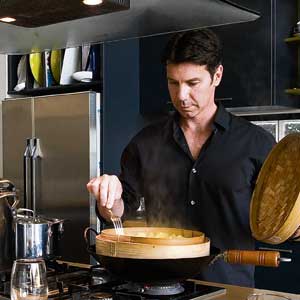 NICO Moretti says his cooking techniques are simple, but sure to impress.

"It's something that people could easily wow their friends and family with, without having to go to a whole lot of trouble," he says with a smile.

The former chemical engineer is owner of Leederville-based Cooking Passions, a cooking school for those interested in creating restaurant-style meals at home.

The classes include nationality themed sessions such as Italian, Vietnamese, Sri Lankan or Balinese, and mixed cuisine classes where Mr Moretti reveals the techniques involved in creating his favourite dishes.

Mr Moretti says there's no time for complacency either, as every few months a new set of recipes is added to Cooking Passions' growing menu.

"Every three to four months we introduce a new class, and it just really depends on sort of what I've been cooking myself, and sharing around, or also sometimes what some of our clients have asked for," he says.

The classes are only limited by the number of people that can fit around the impressively sized kitchen bench overlooking the traditional Balinese garden at Mr Moretti's Leederville home.

"We started the classes here at our home, because we've got a fantastic gourmet kitchen setup," he says.

"We thought we'd start off here just to see if the concept would catch on, with the plan of maybe moving on and looking for a commercial premise somewhere, but the feedback we were getting back from our clients was that we had a really comfortable space.

"The clients feel very welcomed here and because it is a home environment they feel that they could go home and do it in their own kitchen.

"It's not like a commercial restaurant kitchen where sometimes the equipment might be a bit too high-tech for them; they recognise that this is a domestic kitchen and they should be able to take the recipes home and do them at home.

"That's really the goal for the classes, to provide recipes and dishes that people will ultimately be able to cook at home."

The relaxed nature and simple techniques have proved popular with the Cooking Passions classes are regularly booked to capacity well in advance.

"Our classes appeal to a wide range of people; people who like to cook and want to add some new recipes to their repertoire, but also the classes are super-relaxed and social so it's great for people who don't necessarily like to cook but they like to eat," Mr Moretti says.

"We've kept the classes as more of a cooking class demonstration so they don't have to feel intimidated about having to get up and chop in front of people or having to prepare things."

And for those not content with learning how to create succulent surprises in their kitchens, Mr Moretti organises immersive food-holiday experiences in exotic locales, including Bali, Spain and Italy, and has plans to expand the program to France and Morocco.

"These are places where I'm intrigued by the cuisine and also the culture as well," Mr Moretti says

"The type of tour that we do we call a cuisine and culture tour, so it's an opportunity for people to learn a little bit of cooking, but it is a holiday as well so there's plenty of time for people just to chill out."

Although not a trained chef, Mr Moretti has a cooking pedigree.

"Having Italian parents and grandparents food is always a bit of a religion and a bit of a passion," Mr Moretti says.

"I'm self taught when it comes to cooking; I classify myself as a cook I guess.

"We do a lot of entertaining with friends and family, and having a bit of in interest in food I always like trying different things

"Being a cook, and self taught at that, I like to keep things fairly simple and straightforward because that's how I do it, so that's how I want to teach my classes as well.

"I use simple, fresh ingredients, and let the produce really speak for itself rather than having too much involvement with technique."