A Sydney-based angel investor has taken a lead investment role in a Perth startup. 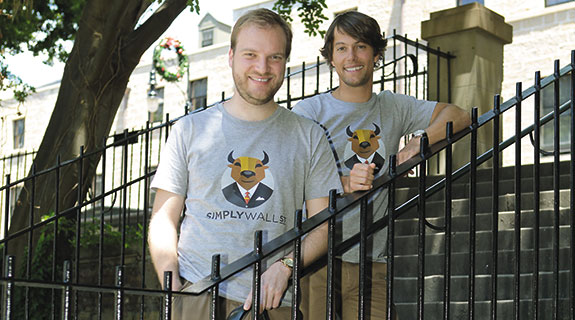 A Sydney-based angel investor has taken a lead investment role in a Perth startup.

Perth startup Simply Wall St has closed a $590,000 capital raising with Mike Quinn (also originally from Perth), leading the round with the participation of Sydney Angels and their Sidecar Fund.

This investment follows on from last year’s $100,000 round, which was part of the AWI Ventures accelerator program (as reported in Business News, ‘Fund fight forces startups flight’, October 13 2014).

Mr Quinn, who is managing partner at Innovation Capital, told Business News the founders of Simply Wall St had impressed him since their first meeting shortly before Christmas last year.

“They characteristically fail because the people fail. Al (Bentley) and Nick (van den Berg) did not suffer from ‘inventoritis’, but intelligently listened and evaluated any advice and were prepared to implement it quickly when they confirmed the validity of the advice.

“They also exhibited another successful characteristic of successful entrepreneurs; they were on a mission to ‘change the world’, not make a quick quid and disappear. They clearly understand the value of cash and are slow to spend – they husband it closely.”

Now leading a team of five at Simply Wall St, co-founder Mr Bentley came to prominence in Perth’s startup scene in the second Startup Weekend, in March 2013. Wearing a red bandana and cutting some serious ninja moves during his one-minute pitch, his ‘stock investing made simple’ idea was first called ‘Ninjavest’.

A few months later he had formed Simply Wall St with fellow Perth friend Nick van den Berg, and they were then selected for the Sydney-based fintech accelerator AWI Ventures.

“Having Mike on board is helping the business grow much quicker than we could otherwise and his experience and knowledge is a welcome resource to draw on.”

The company uses innovative graphic displays (which they call snowflakes) to show the health and ‘investability’ of public companies in the US, UK and Australia.

“The concept is intuitively interesting but difficult to prove without trying it,” Mr Quinn said.

“Another positive aspect of the business is that, should it be successful, it will be relatively easy to scale.”

When asked what the funds will be used for, Mr Quinn said it was a case of “proving that the dogs will eat the dog food”.

In other words, he said, the business model deserved future investment.

The investors are expecting to be patient, and are not looking for an immediate exit opportunity.

“Exit opportunities are a minor issue at the moment,” Mr Quinn said.

“I think a focus on exit is a dumb consequence of the standard flawed VC (venture capital) model. If the business is successful, it will be because it is changing the world, and so will have considerable value and therefore have many exit opportunities when the owners think it is time.”

Now based in Sydney, Simply Wall St recently announced a major deal with National Australia Bank, which is testing the service as part of its broker-trading platform.

Simply Wall St will also be taking part in a UK trade and investment mission in September, and attending the London Fintech Week.