The pot of money that is Royalties for Regions may have a strong attraction for Liberal and Labor parties but don’t expect the Nationals to come bearing gifts this Christmas. 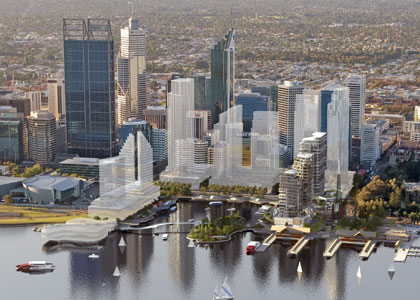 CASH HUNGRY: The Barnett government’s big projects on the table include Elizabeth Quay (top), inner-city light rail and a sports stadium at Burswood.

The pot of money that is Royalties for Regions may have a strong attraction for Liberal and Labor parties but don’t expect the Nationals to come bearing gifts this Christmas.

AS the festive season approaches it seems our state politicians have been at it early, slipping into the cordial to get a heart starter in the race for next year’s state election.

Both the Liberal-Nationals and the Labor Party have been dropping policies and promises over the past few weeks, sending a clear message that we are in election mode.

We’ve even got a $1.5 million government advertising campaign selling us ‘the vision’ (mirage?) of things to come.

Labor leader Mark McGowan was the first to don the big red suit and fluffy white beard in promising struggling households a 7 per cent cut in electricity prices by abolishing the subsidy that mostly metropolitan households pay to provide uniform tariffs across the state.

This clever politics came gift-wrapped by the Economic Regulation Authority, because it is a long-standing ERA recommendation that the current government had failed to implement.

The trouble with the policy is that it’s like giving an eager child a toy at Christmas but failing to buy the batteries to make it work, as Mr McGowan is yet to say how this initiative will be funded.

The obvious and most financially responsible answer is using the Royalties for Regions slush fund but he knows that Santa’s little helper, the National Party, may well morph into a gremlin on this issue. But more of that later.

Not to be outdone, Premier Colin Barnett and his treasurer, Troy Buswell, who has the bonhomie and portfolio befitting a real Santa, announced a $1 billion plan for a light rail network for Perth’s inner suburbs.

Parents well know just how excited children get with a good train set, but it has taken the Liberal Party a long time to appreciate its appeal in winning over the hearts of the electorate.

However, it’s not just the batteries that are missing on this promise. This announcement was simply a brightly coloured box with a note inside telling us that, if we are good and vote for the government, we might get a new train when we get older.

This policy is squarely aimed at voters in the key inner-city marginal seats that the Liberals need to hold or win if they are to stay in government.

Like at all Christmases, however, there is always the crazy uncle who threatens to yet again spoil the day by saying something no-one wants to hear.

Last week, Uncle Scrooge – dressed in the form of a looming state budget deficit of potentially more than $1 billion, brought about by the bursting of the iron ore price bubble and the stubbornly high Aussie dollar – emerged to put a downer on plans for the big election party.

This is a real bummer for both the Liberals and Labor because they both know that, rather than shopping at Tiffany’s for gifts for the electorate, they’ll need to look at the specials at Target.

But hey, politicians don’t like doing this and they, like the rest of us, don’t mind getting caught up in the spirit of giving and deciding to put it all on the credit card and worrying about it later.

The trouble for us, and the government more particularly, is that we have been spending up big over the past four years and have grown state debt from just under $4 billion to nearly $26 billion.

To pay off the credit card, governments rely on budget surpluses to mostly cover the interest repayments, predicated on the mining industry and China continuing to deliver, which is now under serious challenge.

For Mr Barnett and Mr Buswell it may feel a little like Groundhog Day. Nearly four years ago to the day they were confronted with the GFC and needed to cut the state budget accordingly.

Back then, federal Labor came to the party by pumping hundreds of millions of dollars into the state budget through various stimulus and infrastructure packages, the multinationals signed big oil and gas contracts, and China was still paying through the nose for commodities.

Today China is scaling back, at least for the time being and, thankfully, the big projects are under way; the dollar will still buy a New York hotel room with an ensuite, but the federal government has not got a shot to fire.

Even if it did, it probably would not feel too predisposed to help, given this state’s relentless attacks on the Commonwealth on just about every issue.

For the past eight years, state politics has been dominated by ‘the vision’ of big-spending projects – a new stadium, underground railway lines, new hospitals, a new waterfront.

All the financial uncertainty swirling around WA over the past week creates a strange and surreal context for the launch of the government’s ‘information’ campaign.

As both the major parties come to terms with the credit and revenue squeeze that the big miners are now responding to,  they will be asking questions about the pot of money that is Royalties for Regions.

The Nationals guard this treasure trove like a hungry dog with a bone and are not frightened at baring their teeth at any suggestion that some of the money should be used on boring stuff like roads or grain freight rail upgrades.

R4R is a good policy but was born out of a premise that our country and regional cousins had it tough while the rest of us, battling to pay mortgages and find good schools for our kids, were living it up in the city at their expense.

Both Liberal and Labor leaders know it is perfectly equitable under R4R that some of the money be used for offsetting the subsidy people in the south of the state pay so that people in the north can have access to parity electricity pricing.

The trouble is they both know that the Nationals are philosophically and politically opposed to giving up anything that looks like it’s helping out ‘lazy and unappreciative’ city slickers.

There is simply no political capital in this concession for the National Party, despite the Nationals’ support for increases in electricity prices, when they are trying to use every last dwindling R4R dollar on claiming seats in the state’s north.

Over the remainder of the year it will become increasingly clear whether the news of the past two weeks is a short-term blip or a long-term adjustment.

Whatever it is, our politicians need to make sure that their enthusiasm for electoral success is suitably tempered to reflect these uncertain times and that our election stocking contains nothing more than an IOU.

• Paul Plowman is a former head of the state government’s media office and is currently MD at Plowman & Co, which specialises in business-to-government relations. Joe Poprzeczny is on assignment overseas.