Calidus Resources has intersected wide zones of high grade gold at its Coronation prospect, 12km west of its flagship Klondyke resource in the east Pilbara. Results include a 10m intersection grading 4.69g/t gold from 57m and 5m @ 4.48g/t gold from 35m down-hole. The company’s drill rigs are going flat out at the Warrawoona gold project, targeting ore extensions both down-dip and along strike. 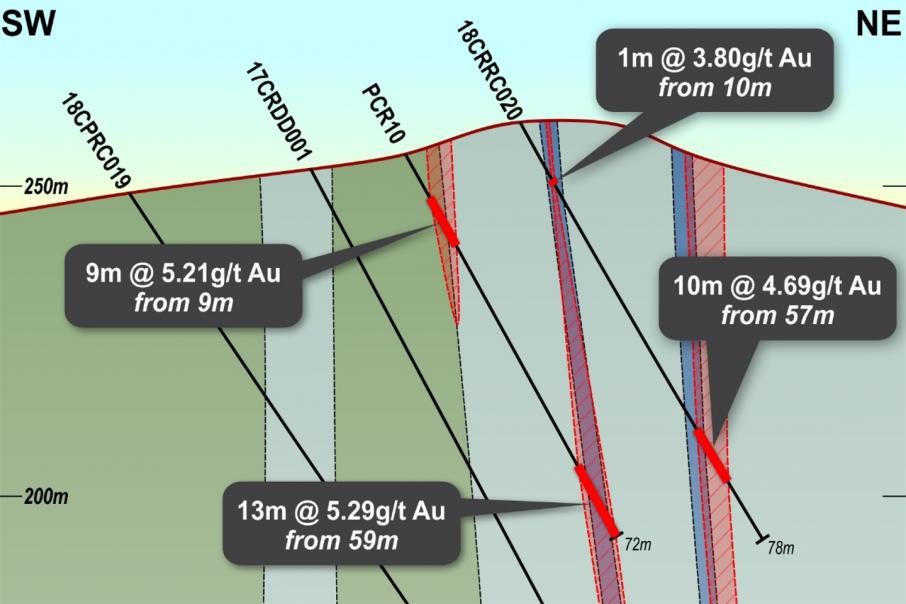 Gold explorer Calidus Resources is on a roll at the moment, this week reporting more solid high grade drill results from its Coronation prospect, about 12km from the ASX listed junior’s flagship Klondyke gold resource in the Pilbara.

The company’s latest infill and extensional drill program has not disappointed with a 10m intercept grading 4.69 grams per tonne gold from 57m down-hole and 5m @ 4.48g/t gold from 35m down-hole.

The Coronation prospect lies along the Coronation shear zone, which is a splay from the regionally extensive and well-endowed Klondyke shear zone that lies at the heart of Calidus’ broader Warrawoona gold project.

The recent drilling was aimed at proving up gold mineralisation at Coronation ahead of an imminent maiden JORC resource estimate for that ore system.

The work follows on from historical drilling and work completed by Calidus in 2017-18, which delineated a 250m long, high grade mineralised zone at Coronation, contained within a number of distinct shears located at changes in the rock sequence.

Gold appears throughout the mineralised zone in sulphide-bearing banded iron formation units and is dipping steeply with thicknesses between 2 – 6 metres wide.

The mineralisation forms a prominent ridge line about 4.5km long around Coronation and the company said that it had only targeted about 1km of this strike to date.

Calidus has only tested the mineralisation to a depth of 80 – 100 metres at present.

“We … have two drill rigs operating at Klondyke and the St George Shear with an aim to increase the mineral resource and build value to expand our future development options as we commence a pre‐feasibility study in early 2019. I look forward to reporting these results as they come to hand in the coming weeks.”

The company has long expressed a desire to underwrite its upcoming PFS for the Warrawoona project by generating a global mineral resource inventory exceeding 1 million ounces.

The current resource of 10.5 million tonnes grading 2.11g/t gold for 712,000 ounces of gold dates from December last year, so it will be very interesting to see what Calidus can come up with later this year, after the significant drilling efforts undertaken at the project throughout 2018.