Nzuri Copper has extended its copper mineralisation to over 270m of strike and a vertical depth of 150m, after the latest drilling at its Monwezi 2 prospect in the DRC. Best results of up to 7.1m @ 0.82% copper from 73.9m down-hole were returned. Nzuri also generated an Exploration Target for Monwezi 2 ranging between 1.0 - 2.5 million tonnes grading between 0.8 - 1.5% copper. 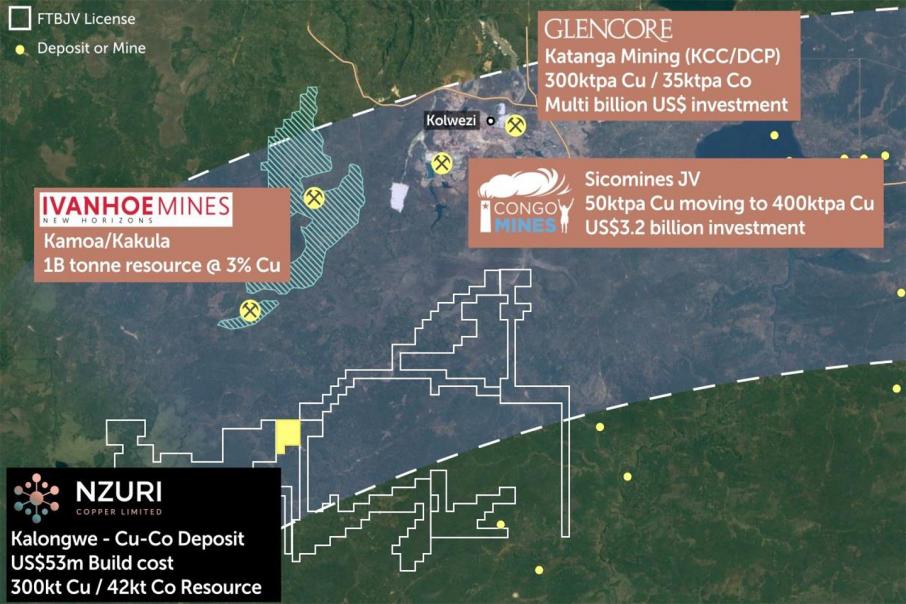 ASX listed Africa focussed copper explorer, Nzuri Copper has confirmed that mineralisation now extends over 270 metres of strike and to at least a vertical depth of 150 metres at its emerging Monwezi 2 prospect in the Democratic Republic of Congo.

The latest drilling at the project has unearthed new intercepts close to surface, with results going up to 7.1 metres grading 0.82% copper from 73.9m down-hole.

Another hole intersected the stratiform copper mineralisation at depth and returned 5m @ 0.8% copper from 196m down-hole and 2.85m at a respectable 2.32% copper from 203.5m.

The company said the deep drilling intercepts will now be drilled up-dip to the southeast to determine the overall continuity of the new zone.

These results have confirmed the potential to define additional copper resources at the Monwezi 2 prospect, which is 3.6km along strike to the southwest of the flagship Kalongwe deposit.

A Feasibility Study for the Stage 1 development of Kalongwe using a dense media separation plant, shows robust economics for the initial 8 year mine life, with a pre-tax NPV of USD$186m an IRR of 99%, payback in less than 2 years and a relatively low CAPEX of USD$53m.

The company is now on the hunt for more regional satellite copper-cobalt resources within easy trucking distances of Kalongwe.

The latest drilling at Monwezi 2 has been used to establish an estimated Exploration Target for the deposit, with Nzuri saying that the prospect area could potentially hold between 1.0 million to 2.5 million tonnes grading between 0.8% and 1.5% copper.

The exploratory drilling forms part of the ongoing 2018 program within the company’s Fold & Thrust Belt JV, located in the Katangan copperbelt, where it retains an 85% ownership.

It follows on from the discovery of a zone of shallow, high-grade cobalt mineralisation at Kalongwe SW, which is located only 800m from the proposed Kalongwe open cut.

“Together with Kalongwe SW, we now have two clearly defined targets within a 3.6km radius of our proposed processing facility – both of which have the potential to be rapidly converted into JORC compliant resources with additional in-fill drilling.”

“Planning is well advanced to undertake systematic resource drilling, most likely following the completion of the 2018 exploration field season.”

The company is sitting in a desirable postcode in the DRC, surrounded by monster copper and cobalt projects operated by titans such as Ivanhoe Mines and Glencore.

Regionally, there is also plenty for Nzuri to ponder, with historical work completed by Ivanhoe at the company’s Mamba prospect, 23km northeast of Kalongwe, producing a deep intercept of 4m @ 1.8% copper.

The company has also just completed a short program at the Kasangasi prospect, 20km west of Kalongwe and assay results are pending.

At Kambundji East, about 20km east of Kalongwe, Nzuri is undertaking trenching and related ground work ahead of a proposed RC drilling campaign in the region.

The trenching is targeting magnetic lows which are interpreted to be extensions of the mine series buried under shallow cover, along strike from the high-grade Kambundji East prospect.

All in all, a pretty busy field exploration season for Nzuri in the DRC.

With a number of environmental and key permits already in the bag and a positive feasibility study completed, Kalongwe looks to be one of the most straightforward, base-metals focussed, development projects going around at present.