See you at that new bar

Chris Vivian talks to Russell Quinn about his new venture above The Flying Scotsman. 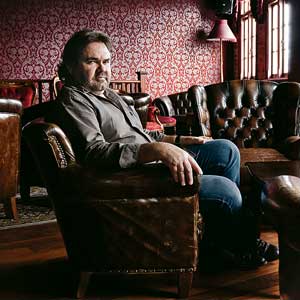 SITTING PRETTY: Chris Vivian in the comfortable surrounds of his yet-to-be-named bar above The Flying Scotsman. Photo: Grant Currall

AN unnamed, yet-to-be officially launched lounge bar positioned on the Beaufort Street strip has been flying under the radar of Perth's bar-hopping crowd for about six months, but that doesn't mean there's been a shortage of bums on seats.

And what seats they are, with a number of classic Chesterfields, antique armchairs and comfy couches available in this Melbourne-flavoured, bordello-inspired bar.

Situated upstairs from Mount Lawley haunt The Flying Scotsman, this funky new lounge bar is the brainchild of the pub's owner, Chris Vivian.

Mr Vivian has been running The Flying Scotsman, or the Scotto as it's known to the locals, for nearly a decade and only decided to make use of the space upstairs when the building's landlord mentioned that an outside source was keen on opening a nightspot there.

"A few years ago the landlord had some guy who wanted to put a nightclub above our pub, and I told him if anyone was going up there, we were," Mr Vivian told Gusto.

"He wouldn't have had anywhere to keep anything, he would have had no store room, nothing, and we would pay the rates and taxes on the thing and someone else would be up there raking it in."

But the likelihood of some competition wasn't the only motivating factor for renovating the top floor and setting up a new bar.

"I think the area sort of needed something," Mr Vivian says.

"There's not much up this way at this end of town, once you get past Walcott Street lights it's pretty much all over.

"Inglewood down the road, the Civic is open one or two days a week now since Woolworths or Coles or whoever it is thought it was too hard and only wanted the bottle shop.

"The Seven Seas seems to spend more time closed than open, I don't know what's going on there.

''And Must Wine Bar down the road; if you haven't got a pink shirt on you can't get in there."

Mr Vivian's creation, which is based on a New York nightclub called 'Madame X' designed around a 1920s French bordello, has been very popular so far, although Mr Vivian is adamant it's not affecting his business downstairs.

"The (upstairs) club is not taking anything away from the Scots," he says.

"We tried to gear it so that never happens, we didn't just want to move our clientele from here straight upstairs.

"It's really tailored to Mount Lawley clientele who want something different from what's down here currently."

While the venture has started well, Mr Vivian admits there have been some challenges, citing the interruption in trading downstairs as the renovations took place as the greatest hurdle.

Mr Vivian hesitated to put a price tag on the fit-out and the year-long building costs, which included building a balcony above Town of Vincent land (and resulting negotiations with the council) but he's confident it's been a smart move.

"The location and the whole strip is growing into a bigger thing than it was a few years ago," he says.

"And the customers tell you what they want; you know, they go 'do it, do it, it'd be good."