San Antonio the gift that keeps giving for Hot Chili

Hot Chili has reported more shallow, high grade copper drilling results from its RC drill program at the El Fuego project area in central Chile. Assays showed intersections up to 9m @ 2.0% copper from 132m down-hole and 16m @ 1.1% copper from 93m down-hole at the San Antonio copper mine prospect. The ore system strikes for almost 700m, to a depth of 200m and plunges shallowly southwards. 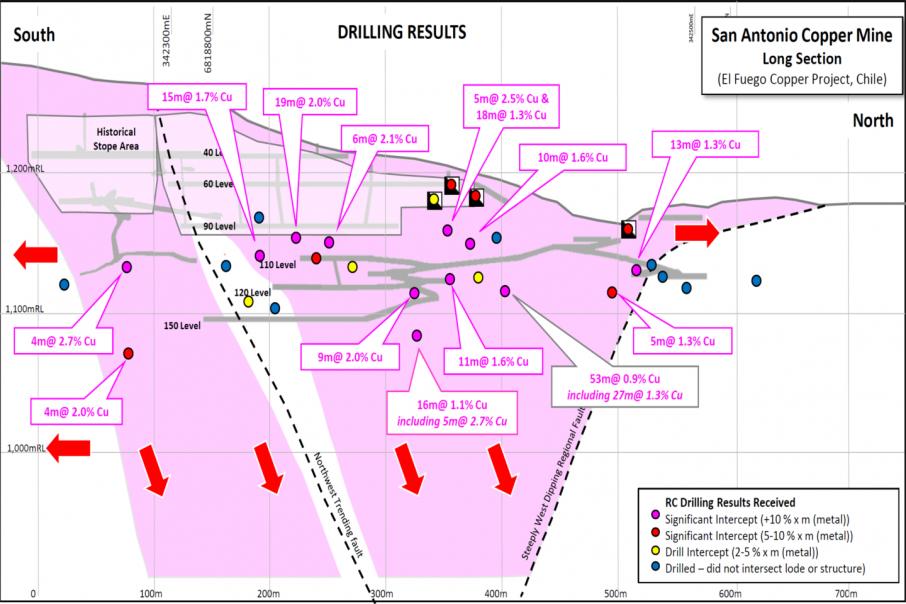 The strong copper drilling results have continued from the San Antonio prospect for Hot Chili in central Chile.

Another drill hole returned 6m @ 2.1% copper from 65m down-hole at the emerging prospect.

The company has been on a roll since releasing the first drilling results from San Antonio in July and has now defined copper mineralisation over a strike length of almost 700m.

The work has also outlined ore grades to about 200m depth from surface and the shallow nature of the mineralisation makes the deposit amenable to open pit mining extraction in the future.

According to management, the mineralisation remains open at depth and along strike from the areas defined to date.

San Antonio lies within an easy 20km trucking distance of Productora and has the potential to make a positive material impact on the head grade of the company’s future copper production scenarios in Chile.

A recent research report by EverBlu Capital out of Sydney modelled a higher grade throughout option for Hot Chili from the broader El Fuego project, setting a price target of 17c a share for the currently 2.5c a share company.

The company plans to advance the Valentina prospect towards the commencement of resource definition drilling, providing a potential second nearby satellite source of higher grade copper.

Additionally, the Lulu copper mine extension to the west of Productora and multiple follow-up copper/gold targets in the 8km long Valentina-San Antonio mineralised corridor give plenty of blue sky potential within the El Fuego ground.

Hot Chili will now be pedalling fast to get a maiden mineral resource estimate compiled for San Antonio and it will start putting some meat on the bones of this lucrative looking asset.