A focus on safety and efficiency has helped Tensa Equipment spin-off Roborigger win an unprecedented three of four sponsored platinum awards at this year’s Innovator of the Year ceremony, including the Business News ‘Great for the State’ award. 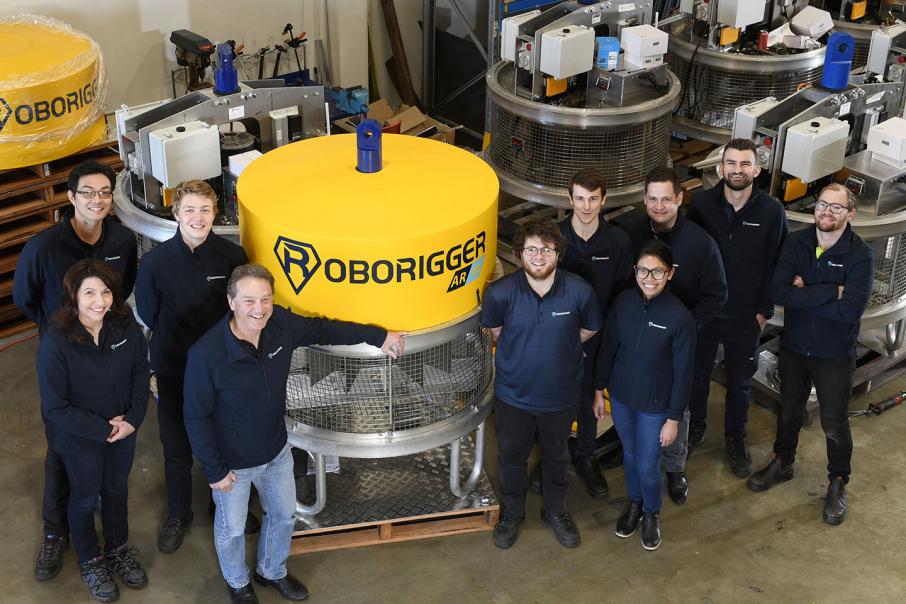 Roborigger has customised its equipment to suit the needs of customers including Woodside. Photo: Tensa Equipment

A focus on safety and efficiency has helped Tensa Equipment spin-off Roborigger win an unprecedented three of four sponsored platinum awards at this year’s Innovator of the Year ceremony, including the Business News ‘Great for the State’ award.

The success comes a decade after managing director Derick Markwell founded Tensa Equipment, originally to develop a product range to improve safety in the construction and resources industry.

Though Tensa Equipment continues to develop other innovations, including a wireless motion monitoring device for offshore lifting and dynamic shock absorbers for cranes, the win by Roborigger cements its reputation in the state’s construction and resources industries.

Employing remote load lifting technology for cranes, aimed at improving safety and efficiency on building and work sites, Roborigger emerged following a conversation Mr Markwell had with a prospective client in Europe who had issues installing wind turbines.

“When they went to attach the blades, they couldn’t hold them still; they’d twist in the wind, and they’d have to shut down at 12-knot wind speed,” Mr Markwell told Business News.

“He said if he could get to [install blades in a] 15-knot wind, that would be worth half a million dollars to him.”

On his return to Perth, Mr Markwell saw an opportunity for the resources and construction industries, and began talks with marine technology company VEEM about developing gyrostabiliser systems that would brace structures for the purpose of ongoing maintenance work.

A review of that concept proved ineffective, however, and Tensa Equipment began working on its own inertial system to address the issue.

Using a rotating flywheel to orient loads, the company invented a device that essentially eliminated the need for workers to hold loads in place with taglines under cranes, reducing time spent in unsafe conditions and improving overall efficiency.

That led to interest from construction giant Multiplex. After reviewing early prototypes, Multiplex started using the equipment on some of its most prominent projects, including the WA Museum redevelopment.

Mr Markwell explained that Roborigger was sold on the premise it could make construction in densely populated urban environments safer and more efficient.

“When loads have to be lifted into tight spaces or busy streets, you don’t have the ability to swing that load out over the street and orientate it,” he said.

“You don’t have the ability to have people stand in lanes and block traffic, and you have to lower the load down closely against the structure.

“In that situation, [Roborigger] makes the work extremely efficient and so much safer.”

In addition to its inertial-based stabilising system, Mr Markwell said Roborigger supplied an internet-connected tracking application for its users. This provides them with logs of date, time, weight and the geographical position that loads have been lifted, and a full tracking logistics database for loads.

That’s led the company to specialise the equipment for customers including Woodside Petroleum, which enlisted Roborigger to build a specific unit for its own sites.

In turn, Woodside has aided Roborigger with in-kind funding, connecting the business to researchers at Curtin University as well as assisting in its application for matched funding under the federal government’s Innovation Connections grant scheme.

“They’ve been following us all along,” Mr Markwell said.

“Now that we’ve built a unit for [Woodside], they’ve been talking to contractors and spreading the word that there’s a better way to do things.”

Outside of Australia, Mr Markwell said Roborigger had begun engaging with contractors worldwide, with Japan-based investors travelling to Perth later this year to understand how the technology can play a role in the future of building automation.

Mr Markwell said the device had sparked interest with clients and partners due to the safety and efficiency it brought to their processes.

“The resources industry does not want people under a load or crane boom, but the construction industry has had to live with doing that for the past 100 years, and it’s regarded as business as usual,” he said.

“They don’t see Roborigger as enabling something they’re desperate to do; it opens the opportunity to operate as safely as the oil and gas industry.”

Innovations that aid in improved safety proved popular at the awards, with iSOL8 securing the DXC Technology sponsored award for digital innovation for its ‘Lock Out Tag Out’ technology.

iSOL8 is an OHS risk management and consultancy company that has worked with BHP, Rio Tinto and Sandfire Resources, and its technology uses a combination of mobile devices and handheld readers to isolate hazardous areas during operation or maintenance.

By reducing human error and administration time, the process aids in streamlining isolations in factory settings and has already undergone successful live field trials in a tier one project south of Perth.