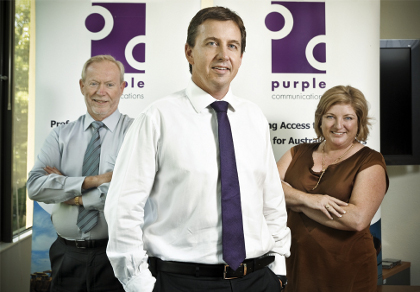 Listed company STW Group has added to its Perth media and communications interests by purchasing a 49 per cent shareholding in public and investor relations firm Purple Communications.

This adds to STW’s shareholding in Perth-based advertising agency The Brand Agency and media planning and buying company Ikon.

STW’s investment, for an undisclosed sum, has been made via its Sydney-based corporate and financial PR firm Cannings. As a result of the investment, Purple will change its trading name to Cannings Purple.

The remaining 51 per cent of Purple will be retained by its founder and managing director Warrick Hazeldine, and directors Annette Ellis, Caroline Thomson, Ryan McKinlay and Richard Harris.

The investment adds to a trend that has seen Perth’s major financial PR firms link into national and international groups.

Professional Public Relations and FTI Consulting, which were the top two financial PR firms in WA Business News’ 2011 corporate finance survey, were originally owned by their Perth directors but have since been acquired by the national groups.

Purple and locally-owned Read Corporate were the main rivals to the two market leaders.

STW said the Purple investment would build Cannings’ capability, adding to offices in Sydney and Brisbane and partner companies in Melbourne and Asia via the Ogilvy Public Relations Worldwide.

Commenting on the strategic rationale, STW chief executive Mike Connaghan said "financial and corporate PR takes us directly into the c-suite of big businesses, dealing with CEOs and boards on the most critical issues their businesses face.

“This type of access and influence generates unique momentum which often provides opportunities for other businesses within the STW group. It's a smart business to be in, and this investment further cements our leadership position."

Mr Hazeldine said “this is a partnership we have been working toward for some time”.

“Becoming part of the national STW network will expand the service we offer our clients, and provide a stronger presence and profile on the East coast and across important Asian markets.

STW has interests in about 70 media and communications businesses, including Labor-aligned lobbying firm Hawker Britton, which closed its Perth office last year, and newly established firm Barton Deakin, which has a Liberal Party alignment.

Purple director Richard Harris will represent both firms in the Perth market, and emphasised that Purple will contine its non-partisan approach to lobbying.