Adriatic Metals’ confidence that it can grow its spectacular high grade polymetallic Rupice prospect in central Bosnia even further has received a boost after two new assays indicated the area’s mineralisation is larger than previously thought. Results from one of the two holes testing Rupice’s southern extensions returned 16 metres at 1.96 grams/tonne gold, 350g/t silver, 5.3% zinc, 3.4% lead, 0.5% copper and 43% barite from 330m. 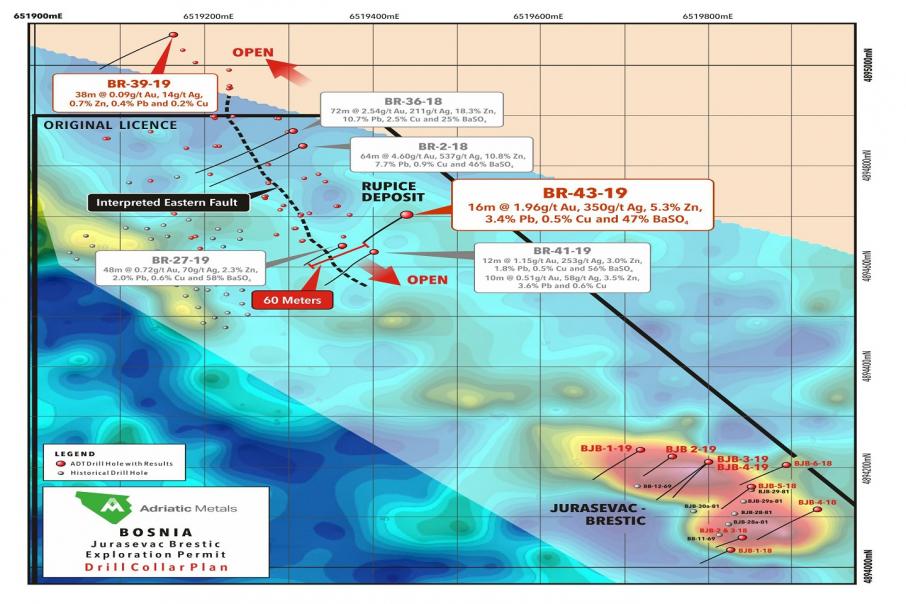 Dual listed Adriatic Metals’ confidence that it can grow its spectacular high grade polymetallic Rupice prospect in central Bosnia even further has received a boost after two new assays indicated that the area’s mineralised footprint might be larger than previously thought.

This drill hole included a 10m section sporting 2.83g/t gold, 536g/t silver, 7.4% zinc, 4.8% lead, 0.5% copper and 60% barite - suggesting there could be a further substantial thickening of the mineralisation as it extends further south into untested territory.

Adriatic said that its recent drilling has also extended the mineralisation some 200m downdip and outside of its current ore block model.

Similarly, a 446.5m hole in Rupice’s northern extension intersected an upper lens of 58m of lower grade mineralisation and a further two lower lenses of 8m and 6m respectively.

Adriatic said drilling in the northern extension was over 80m along strike and also outside of the current ore block model. Furthermore, the mineralisation remains open further to the north.

Rupice is one of two key prospects being targeted by Adriatic at its wholly owned multi-metals Vareš project, which is located around 50 kilometres north of Sarajevo. It currently has a mineral resource of 9.4 million tonnes grading 5.1% zinc, 3.3% lead, 1.8g/t gold, 183g/t silver, 0.6% copper and 31% barite.

Adriatic said its short term aim was to now expand the current JORC resource at Rupice and carry out further exploration on a number of other prospects within the Vareš concession.

Adriatic’s Managing Director and Chief Executive Officer Paul Cronin said: "The latest drill results in the southern extensions of the Rupice deposit clearly demonstrate that the high-grade mineralisation continues outside our current mineral resource and south towards our Jurasevac-Brestic prospect a further 500m to the south east.”

“This is our deepest high-grade intercept to date at Rupice and given its location to the east of the current mineralisation, opens the deposit to reinterpretation of the structural controls that have led to the thickest and highest grade results on the eastern down dip extent”.