‘Ruddbull’ puts on a show for the cameras

It’s often said that politics is theatre, but it seems two recent party leaders have missed their true calling. 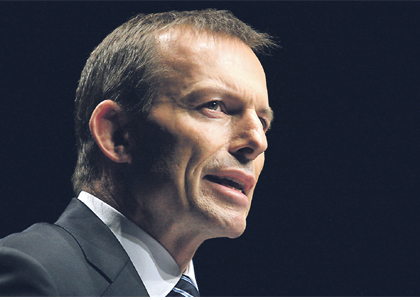 It’s often said that politics is theatre, but it seems two recent party leaders have missed their true calling.

I LOVE encountering new English words, especially those with a political flavour.

Among those that most readily come to mind are the following. The first is the well-known word ‘boycott’, which hails from Captain Charles Boycott, a land agent for absentee Anglo-Irish landlord and politician, John Crichton, the 3rd Earl Erne.

Irish tenant farmers had launched a campaign to have rents slashed during what was called the Irish ‘Land War’.

Boycott rejected rental reductions and even moved to evict several refuseniks, thereby sparking a standoff that inconvenienced the captain, who was ostracised by his workers’ refusal to accept employment in his house, stables or fields.

Even local businesses ceased trading with him and the postman wouldn’t deliver his mail.

Although the various ins and outs of this isolating of Captain Boycott are largely forgotten, his surname hasn’t been, since it’s now a commonly used word.

Another word is ‘stassenite’, which is less well known here because it originated in the US.

Admittedly I haven’t used ‘stassenite’ often in conversation, but when I have there’s always a need to explain its origin and meaning.

After completing his military service, Stassen served as president of the University of Pennsylvania (1948-53).

Despite such enviable successes, however, the word ‘stassenite’ has come to mean anyone who makes a number of unsuccessful bids to gain elected office.

In other words, someone deemed a political failure.

And the reason is that Stassen: failed to gain the Republican Party’s presidential nomination a dozen times between 1944 and 2000; failed to regain Minnesota’s governorship in 1982; and was twice unsuccessful in becoming a US senator and governor of Pennsylvania.

Sadly, Stassen’s years as a successful Minnesota governor are overshadowed by his many bids to gain the highest office in the land and several other elected positions.

Strangely enough, the origins of what many Australians may consider a home-grown phrase - ‘kangaroo court’ - appear to be otherwise.

According to the internet Free Dictionary by Farlex, ‘kangaroo court’ is ‘slang of US origin’ and is defined as: “An unfair, biased, or hasty judicial proceeding that ends in a harsh punishment; an unauthorised trial conducted by individuals who have taken the law into their own hands, such as those put on by vigilantes or prison inmates; a proceeding and its leaders who are considered sham, corrupt, and without regard for the law.”

“Scholars trace its origin to the historical practice of itinerant judges on the US frontier,” it says.

“These roving judges were paid on the basis of how many trials they conducted, and in some instances their salary depended on the fines from the defendants they convicted.

“The term kangaroo court comes from the image of these judges hopping from place to place, guided less by concern for justice than by the desire to wrap up as many trials as the day allowed.”

So we Aussies can’t claim it, even though a boomer features on our, and only our, national emblem.

Unfortunately I can’t reveal who coined this snappy term, which immediately tells all.

I say this because the one who last used it in political commentary, Paul Sheehan of The Sydney Morning Herald, (November 22 2012) points out that it was already in use.

Sheehan was commenting on Messrs Rudd and Turnbull’s recent joint appearance on the ABC program, Q&A.

In his column he concisely described their cocksure performances, and various remarks about the possibility of either ever returning as number one.

“All the earnest speculation about these two former and potential leaders has even been given a name -Ruddbull,” Sheehan wrote.

He then added that such speculation was “mostly bull” anyway.

“Turnbull has three strikes against him,” Sheehan continued.

“He has a reputation, deserved or not, for self-absorption.

“When he was the leader he reached the second-lowest approval rating in the history of Newspoll -14 per cent - in November 2009.

“Shortly after he lost the leadership.

“It was Abbott who saved the coalition from going over an electoral cliff, Abbott who caused the political earthquake which transformed federal politics in 2010, and Abbott who erased Labor’s 18-seat majority in the 2010 campaign, fought to a 72-seat draw in the house, and led the coalition to victory in the popular vote for the Senate.

“After two years in opposition, the coalition remains positioned to win the next election.

“Abbott will be retooling his leadership style to become less relentlessly pugnacious.

“Besides, any leadership coup by the Liberals would have the taint of cynicism, thanks to Labor’s own use of the tactic.

“Labor has poisoned that well.”

Sheehan is equally acerbic about the other half-donor to the new word.

“Rudd, too, has three strikes against him,” Sheehan continued.

“His parliamentary colleagues will not tolerate his overbearing, supercilious ego.

“His resignation as foreign minister and leadership tilt in February was a debacle.

“And Labor has run out of leadership shuffles.”

You’ve confirmed my long-held view that both gentlemen would have been successful actors or TV comperes, but not, however, ministers of the Crown.

Both missed their calling.

What’s not widely known is that ‘Ruddbull is an apt description of both men for another reason.

When Mr Turnbull was environment minister in the dying days of Howardism, he put to cabinet a bright-spark idea a boffin in his department convinced him needed acting upon.

It was that Treasury should subsidise installation of pink batts into millions of’ homes to reduce power usage.

“I’m not having taxpayers subsidising your [Mr Turnbull’s] multi-millionaire voters to get their houses insulated,” Mr Costello said in cabinet.

However, the same boffin re-sur-faced as soon as Mr Rudd and Julia Gillard got control of Australia’s purse strings, guessing that the former was just like Mr Turnbull.

The rest, as they say, is history.