Who believes Kevin Rudd has anything different to offer this time around? 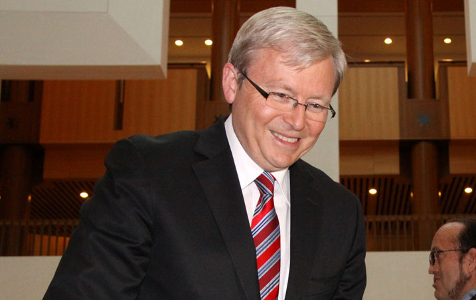 Who believes Kevin Rudd has anything different to offer this time around?

No matter how often recycled Labor leader and prime minister, Kevin Rudd, criticises Tony Abbott’s coalition for its alleged lack of policy detail, his first stint in power will be remembered as a governance nightmare.

So Mr Rudd’s re-emergence following his persistent claims that he wouldn’t be challenging his onetime deputy, Julia Gillard, is an appropriate time to look back at his first term.

The first feature is that, although Mr Rudd and his then deputy led Labor into power, neither had any idea what to do after winning.

That more than anything explains why Mr Rudd felt compelled to call that ostentatious talkfest in Canberra of Australia’s ‘1,000 best and brightest’.

The illustrious 1,000 were expected to draw-up a roadmap for Labor, something those who’d cast a vote at the December 2007 election had reasonably assumed that he and his party’s campaign promises and platform had already done.

As things transpired, the 1,000 best and brightest only came forth with a handful of proposals, all of which Mr Rudd soon discovered were borrowed from what some state governments had already tried.

In a perverse turn of fortune for Labor, along came the North Atlantic banking sector meltdown – the GFC.

That was manna from heaven for the Rudd government.

For here, Mr Rudd and Treasurer Wayne Swan jumped right into doing what Labor is best at; here was an excuse for big spending, alongside big borrowing, plus big vote buying.

None of which was needed because, seemingly unknown to Messrs Rudd and Swan, Australia had just entered its biggest-ever mining boom, thanks to China’s seemingly insatiable demand for iron ore, coal and gas.

It wasn’t long after those three ‘bigs’ had further boosted Mr Rudd’s already well-developed self-confidence that along came another – big satisfying poll ratings.

Never before had a prime minister had such an enduring post-election honeymoon; not even Bob Hawke, the previous record holder in that contest.

Ever so gradually, however, things started to go lemon-shaped.

And this would prompt the Liberal Party’s national director, Brian Loughnane, to launch those memorable and devastating 30-second ‘Kevin O’Lemon’ television advertisements.

At long last crunch time was on the way for Kevin 07.

Unwelcomed outcomes from his big borrowing and big spending began surfacing in the form of disastrous reports about those pink batts and exorbitantly costly school sheds.

And budget deficits returned, unlike what had happened during the John Howard years.

It was around this time that Mr Howard made the insightful remark that Mr Rudd’s popularity was clearly very broad, but also very shallow.

So as late 2009 approached, Labor’s front and backbenchers did the inevitable – they began asking themselves and each other how their idiosyncratic PM would shape-up at election 2010.

Mr Rudd had made all sorts of claims over the previous two years; he believed in a big Australia, increased defence spending, and even the need for a new submarine fleet.

But these claims were just that, mere claims.

I say nothing of his constant haranguing of voters about alleged global heating and the need to tax CO2, which the polls showed wasn’t overly popular in the electorate.

Nor do I elaborate on his abject incompetence over increased entry by foreigners into Australia – so-called ‘asylum seekers’ – of which there are now 45,000 and counting.

So the Loughnane lemon kept appearing on television screens, having a devastating impact upon poll results.

So smoothly that he never challenged her by insisting on a caucus vote.

About 30 months of hollow claims and mounting failures had resulted in virtual unanimous caucus concurrence that Kevin 07 must go.

And all Ms Gillard could say was that the Rudd government, in which she was deputy and the key navigator of its so-called ‘gang of four’ (Messrs Rudd, Swan, Lindsay Tanner, and herself), had “lost its way”.

My view, then and today, is that the government – and the gang of four, especially – never knew what the correct way was.

And I doubt that the now recycled Mr Rudd and his second deputy, Anthony Albanese, know today what it is.

Do they have any idea on debt repayment as revenues cease rising?

Do they know how Australia can regain control over its ongoing intake of asylum seekers?

Sydney to a brick Australia’s Rudd nightmare will continue if he retains power later this year.