Rolling out the red carpet

A hospitality industry veteran has brought a bit of LA glitz to Perth’s entertainment scene. 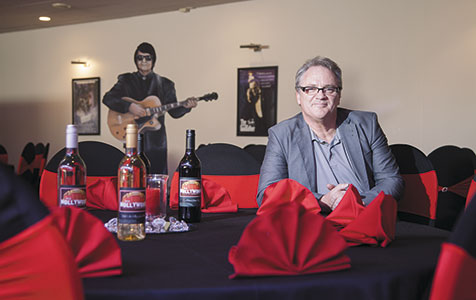 A hospitality industry veteran has brought a bit of LA glitz to Perth’s entertainment scene.

Fans of the glitz and glamour of celebrity and cinema don’t have to travel to Los Angeles to get a taste of the ‘movie-town’ magic, with a new northern suburbs venue bringing a piece of Hollywood to Perth.

Entertainment industry stalwart Tom Tapping is the man behind the venue, Hello Hollywood, having been inspired by the bright lights of the LA nightlife while on a business trip a few years ago.

Mr Tapping has been involved in Perth’s entertainment scene for more than three decades, working as a DJ and playing with bands in the 1980s, to more recently owning an events management firm that specialised in coordinating fundraising events for community groups.

“We hadn’t really had anything like that (Fawlty Towers) in Perth since the 1970s and 1980s,” Mr Tapping told Business News.

“The appetite for it was huge; we were bringing tours in and selling 20 to 25 shows out comfortably, but holding them in restaurants, hotels, yacht clubs and golf clubs.

“So we had a logistical issue of taking it to a different room every night.”

His search took him to Westminster, to an old Italian restaurant and function centre in need of some renovation.

“We spoke with the owner and he wasn’t that keen on putting another restaurant in here,” Mr Tapping said.

“But he loved the concept so much that he was convinced our sort of restaurant will work.

“The feedback we’ve had since we’ve announced what we’re doing, without having publicised it much, is phenomenal.

“The entertainment industry is grabbing it by the scruff of the neck because it’s a fresh new idea and outlet for them to perform in, instead of being a pub or a festival.”

Performers at Hello Hollywood will be sourced from the Western Australian Academy of Performing Arts and the Australian Performing Arts Network, while Mr Tapping said discussions were ongoing with numerous theatre groups that were also enthusiastic about the idea.

APAN chief executive Marina Del Basso said there were currently limited opportunity for young performers in WA, with many forced to look for employment overseas or interstate after finishing at her school.

She said there were 24 full-time students at APAN, with its network of performers aged between 17 and 20 totalling more than 680.

“There are so many great performers here and so limited positions,” Ms Del Basso told Business News.

“For me (Hello Hollywood) is another opportunity for the kids to showcase themselves and get family and friends to come along.

“I’m excited that he’s giving it a go and I’m hoping that Perth people will support it.”

Mr Tapping said he was also negotiating with James Begley and Matthew Pavlich’s Pickstar, which coordinates public speaking engagements and other events for Australian sporting identities.

“One of the things we are currently working through the logistics of is to use the venue as a live TV studio,” he said.

“We can have a live studio audience sitting at tables eating and drinking while we are running shows.

“We’ve got some amazing local talent lined up and some very unusual and spectacular shows.

“The idea is to make it a real Hollywood experience, and the entertainment will reflect that.”