Rods are turning for Tyranna in South Australia 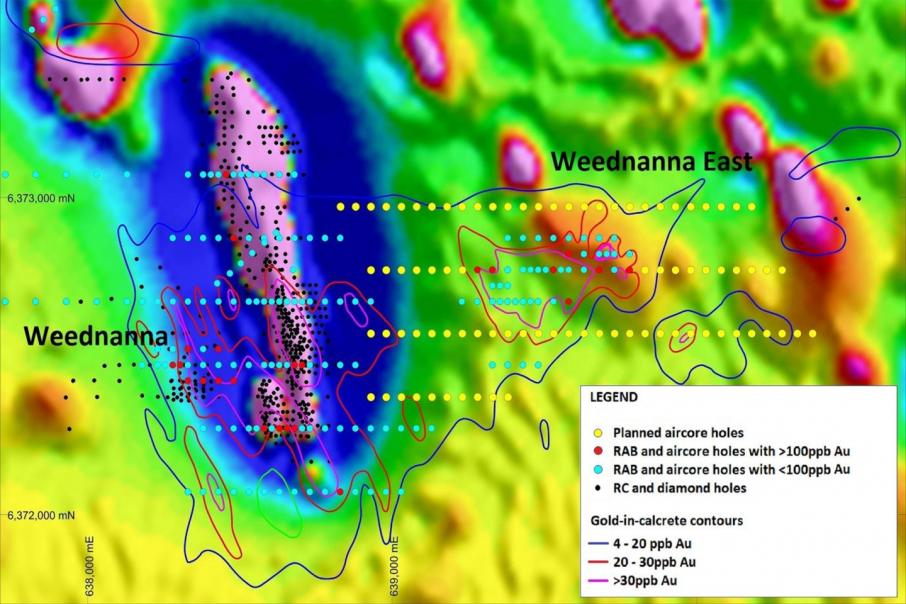 The prospect is situated about 1km east of the partners flagship Weednanna gold deposit, which is part of the larger Wilcherry Project JV between Tyranna and Alliance.

Within 10km of the main Weednanna project, there is some 25km of strike of magnetic iron formations which are considered fair game for the accumulation of gold in the right geological structural positions.

Weednanna East sits right across one of these prospective iron-rich horizons.

Nearby, gold mineralisation has been discovered at the Mawson, Ultima Dam South and Weednanna North prospects within these same iron horizons and hence, a sense of excitement is building for the regional exploration drilling at Weednanna East.

According to Alliance, the aircore drilling program will consist of 4 wide-spaced drill lines, with drill holes on 50m centres.

The drill holes will be completed vertically and are expected to be drilled at about 60-65m deep. Drill samples will be composited over 4 metre intervals from surface and assayed for gold and base metals mineralisation.

Anomalous samples will be resampled and assayed over traditional 1 metre intervals.

The Wilcherry JV is managed by Alliance who holds a 75.01% controlling interest, with the balance held by Tyranna.

The JV area is in the southern Gawler Craton in South Australia, located about 105km west northwest of the port of Whyalla.

The companies are on a roll at present, having only last week reported a maiden discovery of high-grade graphite mineralisation at the Yeltana prospect, just 20km west of Weednanna in the JV area.

Alliance estimated an Exploration Target of 24.5 million to 59 million tonnes grading between 5.5% and 10.2% total graphitic carbon at Yeltana.

The company has now engaged graphite industry experts to assess the commercial and economic viability of potentially developing the Yeltana prospect, which would occur in parallel with development of the Weednanna gold deposit, said Alliance management.