Rods are turning for St George near Leonora

St George Mining has started a 37 hole RC drilling campaign that is aimed at discovering more nickel-copper sulphides at its Mt Alexander project near Leonora in WA. The program will initially target the new West End prospect to test for a continuation of the highly mineralised Cathedrals Belt towards the regionally important Ida Fault zone before moving on to test the new Fairbridge prospect. 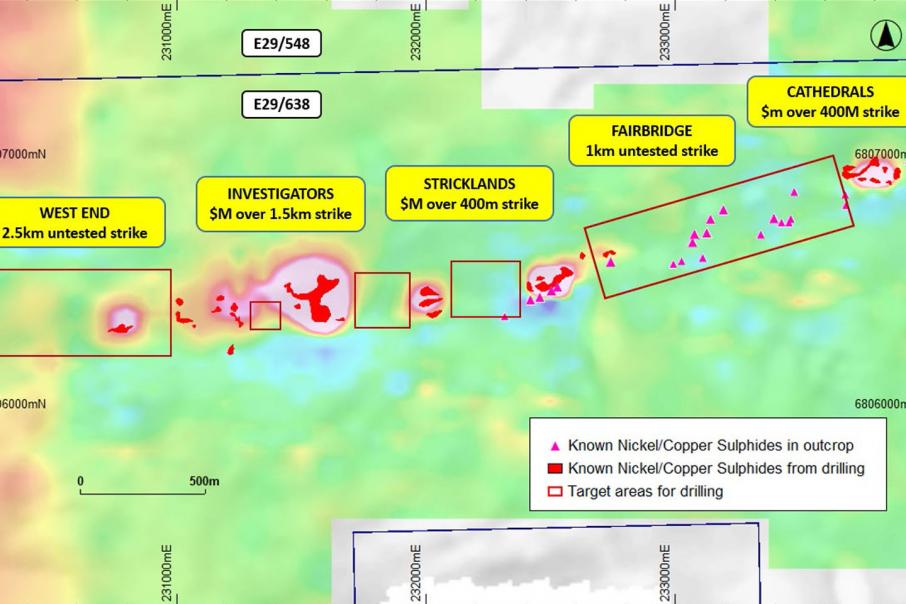 The campaign comprises of 37 holes totalling more than 5500 metres and will initially target the new West End prospect to test for a continuation of the highly mineralised Cathedrals Belt towards the regionally important Ida Fault zone.

Six wide-spaced, deep drill holes will be completed at West End, which has not been effectively explored in the past.

St George will then move on to test the new Fairbridge prospect that strikes over 1km between the existing Stricklands and Cathedrals prospects and is replete with surface gossans that returned impressive rock chip assays up to 1.23% nickel and 1.09% copper.

The company will also carry out infill drilling at the Investigators prospect and other drilling to follow up on massive nickel-copper sulphide intersections in BHP drilling at the Mt Alexander Belt.

Additional holes may be added as initial drill results are reviewed.

Separately, the company has identified a number of electromagnetic anomalies from down-hole surveys of diamond drill holes completed in the last quarter of 2018 at both the Investigators and Stricklands prospects.

These new anomalies have geophysical signatures consistent with network textured and/or massive nickel sulphides and will be tested by a diamond drill program commencing in about four to six weeks.

St George Executive Chairman John Prineas said: “The RC drill programme will be testing for continuations of the known high-grade mineralisation as well as testing for additional occurrences in areas where there has been no or very little previous drilling.”

“The concurrent use of drilling and DHEM surveys will continue to be used to scope out the distribution of the sulphide mineralisation. This has proved to be a very effective exploration method with modelling of DHEM data from drill holes completed at Investigators and Stricklands late last year identifying a number of strong off-hole EM conductors which we believe represent extensions of the known nickel-copper sulphide mineralisation.”

“The strong results from the 2018 drilling continue with final assays from that drilling confirming further high-grade nickel-copper-cobalt-PGEs in multiple intersections.”