Rinehart's gloves off in Fairfax stoush 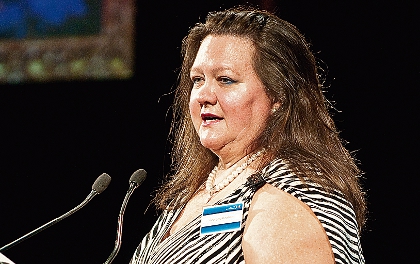 Gina Rinehart has thrown down the gauntlet to Fairfax Media in her push for board representation, challenging chairman Roger Corbett to set and meet a share price target of 87 cents by the company's November annual meeting or tender his resignation.

Mrs Rinehart penned an open letter today to Mr Corbett, outlining her concerns over a sustained fall over the past five years in shareholder value and circulation of the company's newspapers.

Mrs Rinehart currently holds around 18 per cent of Fairfax, and is seeking three seats on the company's board.

On Wednesday, Mr Corbett knocked back Mrs Rinehart's request for representation, saying the board could not reach agreement with her on Fairfax's charter of editorial independence.

But in today's letter, Mrs Rinehart said her utmost concern was how to save an ailing business, rather than Fairfax's editorial charter.

The letter pointedly noted that an 87c share price by the November AGM would represent “only a 50 per cent loss” from the commencement of Mr Corbett's chairmanship in October 2009.

“To limit the loss under your chairmanship to 50 per cent is not an unreasonable expectation, although perhaps shareholders would prefer a higher milestone target?” Mrs Rinehart’s letter asked.

“Shareholders should at the very least be advised what the loss target is, and be assured that should you not meet that target, there would be light at the end of the tunnel.

“And if the five year decline in paid circulation and in revenue of the Fairfax mastheads do not reverse prior to the 2012 AGM, we ask that you tender your resignation at that meeting.”

Mrs Rinehart also raised a raft of other concerns in the letter, including print quality and the tightness of editorial deadlines pending Fairfax's decision to switch printing from modern plants to older ones and questioned whether company directors were receiving full information regarding the effects of announcing a three-year redundancy program.

She also questioned the strategy of partially selling down profitable New Zealand-based auction and classifieds site Trade Me but not offloading the company's radio stations, and asked why cost cutting measures were not implemented sooner amid deteriorating international economic conditions.

Below is a further statement from John Klepec, chief development officer at Hancock Prospecting:

Regrettably the Fairfax Media Statement of 29 June 2012 gives no response to the call for performance milestone targets.  The shareholders remain without any assurance of a commitment from Mr Corbett, that should he not succeed with only a 50% loss of share value since his Chairmanship prior to this year’s AGM, and paid circulations increase (not free increase), that he will tender his resignation.

Mrs Rinehart has never sought control of Fairfax and even the request for 2 HPPL appointed directors and potentially an independent director is clearly a minority position on a board of assuming no resignations, potentially up to 12 directors, 2 out of 12 directors is not a majority!  Indeed Mrs Rinehart had even acknowledged acceptance of 1 HPPL nominated director and one independent in an endeavour to reach agreement with the Fairfax Chairman. It should be clear to anyone, that this is not control.  We repeat our concerns for directors to be restricted by both clauses 5 and 7 of the FMBGP.

Mrs Rinehart has repeatedly advised that she would not use the publications to promote her private interests only.  It is hence incorrect for Fairfax to endeavour to allege that this has been a “personal crusade”.

Fairfax refer to the strategy for the future, so should Mr Corbett have confidence in that strategy he should immediately advise of his willingness to meet or better the milestone targets proposed.  It is not time for further smoke screens, be it reference to TV media which Fairfax is not, or inappropriate selection of time lines, or further avalanches of media against Mrs Rinehart, but it is time to let shareholders know the milestone targets.