Donald Trump may be the early frontrunner, but only time will tell whether his appeal with Republican voters can be sustained. 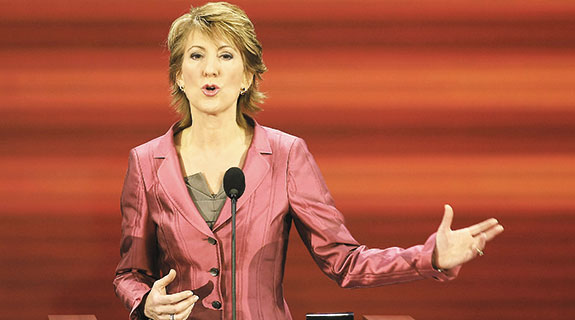 TAKING ON TRUMP: Unsuccessful in a 2010 US Senate bid, Carly Fiorina is now among those fighting for the GOP nomination. Photo: iStockphoto/EdStock

Donald Trump may be the early frontrunner, but only time will tell whether his appeal with Republican voters can be sustained.

When I learned New York billionaire Donald Trump was seeking the Republican Party’s presidential nomination, I discounted it as a flash-in-the-pan bid, probably motivated by his penchant for self-promotion.

Well, things are shaping up differently.

Famously referred to by former wife, Ivana, as ‘The Donald’, Mr Trump has been doing amazingly well in the two nationally televised debates held to this point among contenders for the nomination of the Republican Party, colloquially known as the Grand Old Party (GOP).

So well, in fact, that some consider he’s looking unbeatable, with the word ‘Trumpmania’ now part of the political lexicon.

Rather than making any predictions, let’s consider why Mr Trump is currently leading the way among the Republican contenders and maybe learn something along the way.

Here I’m primarily indebted to highly successful adviser to former US president Bill Clinton, Dick Morris, and an outstanding American historian I leave unnamed since I don’t have his permission to do otherwise.

“The rank and file of both parties have said a resounding ‘no’ to dynastic dinosaurs Hillary Clinton and Jeb Bush, the quintessential Washington insiders who promote the status quo and don’t get the revolution that is happening right in front of them.

“The trend for Clinton and Bush is straight down, because voters are sick and tired of insiders who play by their own rules and benefit from them.

“Right now, only Trump and Sanders give them any hope that this country can be turned around.

“There’s a consensus among activists in both parties that the unique and cherished character of America is rapidly changing, and that the presidential election of 2016 may be the last chance to rescue it.

“While Sanders and Trump likely disagree about almost everything, they are tapping into the same font of populist anger swelling in both parties.

“The Houses of Clinton and Bush were locked, in the words of Time Magazine, in a ‘game of thrones’.”

According to a SurveyUSA poll, Mr Trump leads Mrs Clinton 45 to 40 per cent (of overall voting intentions), with 15 per cent undecided.

“He wins a huge share of the Democrats’ non-white base – 25 per cent of African-Americans, 31 per cent of Hispanics and 41 per cent of the relatively small Asian vote,” Neil Munro of Breitbart News reported.

“That’s a heart attack for the GOP establishment, which predicts that the arrival of even more low-wage foreign workers will yield more GOP votes from low-wage Hispanics, plus more donations from the wealthy investors who pay the salaries of GOP consultants, pollsters, and advertising executives.

“In contrast, Trump is committing GOP heresy by touting a border wall; some form of repatriation program for millions of American-trained undocumented migrant workers; and new curbs on middle-class outsourcing to the roughly 700,000 guest-workers used by Fortune 500 companies.

“Trump’s labor-supply reform would likely create jobs for Americans, raise wages, and lower profits, all of which might somehow, possibly, in an impossible-to-imagine-kinda-existential-pocketbook-process, boost his support among the lower-wage, often-jobless Americans who don’t own stock on Wall Street.”

“Some commentators keep expecting Trump to reach a plateau, but it does not appear to be happening yet,” he said.

“I am beginning to think that the only person who can stop Trump is Trump himself, either by an outlandish gaffe (unlikely) or by tiring everyone by constant commotion, thereby losing the novelty of his appeal.

“We shall see soon what the next debate does to his standing; he could consolidate his lead.

“I think that the person with the most to gain from the debate is Carly Fiorina (CEO at Hewlett-Packard, 1999-2005).

“Ben Carson is currently second to Trump. (Carson, an African-American was professor of neurosurgery, oncology, plastic surgery and paediatrics, and director of paediatric neurosurgery at Baltimore’s Johns Hopkins Hospital.)

“I have a hard time thinking that Carson will remain competitive. The question then becomes: where will his support go?” the historian continued.

“The GOP establishment is hoping Bush or a Bush substitute (Ohio governor John Kasich?) will emerge eventually as the anti-Trump.

“The ultimate alternative to Trump in the primaries might just be another perceived outsider.

“But prediction is risky.

“Look at the events of the past three months.

“And the Democrats will have their turmoil, too.”

I don’t mind which tops the GOP’s presidential ticket, as long as the other is the running mate.

What a GOP team – a Caucasian-American woman and African-American male.

The Democrats will be pulling out their hair as they watch the White House slipping from their grasp.