Perth's backpacker hostels are feeling the pinch in a sluggish economy, despite a currency related lift in the leisure travel market. 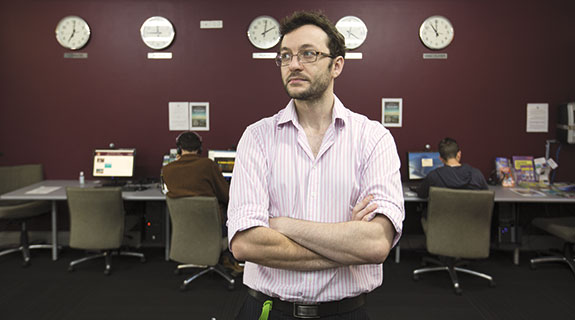 Perth's backpacker hostels are feeling the pinch in a sluggish economy, despite a currency related lift in the leisure travel market.

Western Australia’s weakening employment market has knocked Perth off the backpacker trail, and hostels are feeling the pinch.

At the peak, when China’s appetite for the state’s minerals appeared unstoppable, many of the city’s backpacker hostels were transformed into dormitories for fly-in, fly-out workers.

It was easy money and the hostels couldn’t keep up with demand; but the ground has shifted and a combination of factors is coming to bear.

Cheaper hotel rooms, sharp falls in residential rental rates and the rise of online accommodation sites such as Airbnb and Couchsurfing.com have all eaten into demand for traditional hostels.

But it’s the jobs market that is the single biggest factor in falling occupancy rates in city hostels.

The IT manager at the Emperor’s Crown hostel on Stirling Street in Perth, Tom O’Brien, keeps a close eye on the numbers.

“It might be because the last two years were really good but it’s definitely down,” Mr O’Brien said.

“In Perth it’s all about the jobs … in the last few years people have been coming in and looking for jobs on the mines.

“The biggest thing I have seen (this year) is if they can’t get jobs they are heading east because Australia is an expensive country to come to.”

Coolibah Lodge backpackers hostel identified the looming downturn some years ago and responded by attending international travel shows to promote its accommodation and Perth’s holiday credentials.

Manager of the family owned business, Sandy Wilson, said not enough was done to promote Perth as a destination at the international shows.

“We have to promote Perth as a destination,” Ms Wilson told Business News.

At the height of the mining construction phase, the Coolibah hosted a lot of east coast Australians looking for work on the WA mines.

The wave of economic tourists has been reduced to a trickle, but it’s not all bad news.

All hostels spoken to by Business News reported an increase in traditional vacationers and a shift in the mix of working holidaymakers.

The English and Irish travellers may be returning home as their respective economies show signs of improvement, but larger numbers of Italians and French are visiting as their economies falter.

The rise of online accommodation sites has presented another challenge for the hostels, but many of them have embraced the technology and use the sites to advertise their product.

One of the ways the hostels are attempting to differentiate their accommodation from a room posted on Airbnb or Couchsurfing.com is through a safety message.

Coolibah’s Ms Wilson compared taking a room advertised on one of these sites to hitchhiking.

“What I worry about is there is no structure around who you are sleeping with … it’s just jumping into a car with a stranger,” Ms Wilson said.

“As a manager I have a duty of care.”

The operations manager for the Perth City YHA hostel, Peter Ott, uses the online sites to advertise the YHA hostel but it’s a cost he resents.

“They offer an online service where they consolidate services, we provide the access to that product and we pay the commission,” Mr Ott said.

“In my opinion they are parasitic organisations … but we have to be listed on their sites.”

Mr Ott said Perth was too expensive for many backpackers to include on their Australian itinerary if there wasn’t a thriving employment market.

However, he said the sharp falls in the Australian currency had brought the traditional backpackers back to his hostel.

He said these travellers stayed for a shorter period but he welcomed them back.

“Our purpose is to provide short-term accommodation for the real traveller,” Mr Ott said.

“We don’t want to be a boarding house for working holidaymakers; having said that it was nice to have all the beds full.”