The owners of the popular Breakwater bar in Hillarys Boat Harbour have won a bid to open another beachside venue, this time in Scarborough. 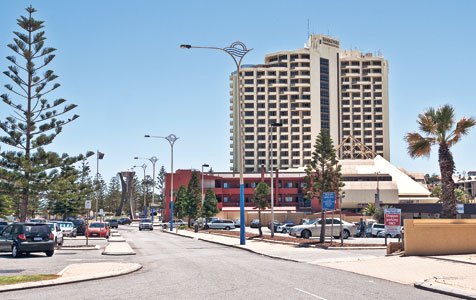 The owners of the popular Breakwater bar in Hillarys Boat Harbour have won a bid to open another beachside venue, this time in Scarborough.

Sean Reid, whose family business has operated The Breakwater for more than 20 years, has been granted a liquor licence for a bar at the bottom of the Rendezvous Grand Hotel.

The Matisse Beach Club, as the venue will be called, will incorporate tropical themes including outdoor ‘cabanas’ and shallow pools in which patrons can cool off while enjoying a drink.

The site was formerly The Lookout and Club A, which closed about 10 years ago, with the site vacant since.

The $60 million redevelopment of the Rendezvous is in its final stages but includes no plans for the unused space.

In the submission to the Liquor Licensing Authority, Mr Reid argued that investment needed to be made to rejuvenate the Scarborough beachfront precinct.

“The area has attracted bad publicity and its reputation has soured,” the application reads.

“This in part is due to poor quality and ailing infrastructure, a lack of services, a lack of diversity in facilities and alcohol-related problems on the beach.”

The proposal sparked strong opposition from the police commissioner, who cited the already existing anti-social behaviour in Scarborough as a reason the licence should not to be granted.

However, the director of liquor licensing has overruled the police commissioner’s concerns, stating efforts to improve Scarborough’s reputation would be aided by investment in a new beachside bar.

“The redevelopment of Scarborough Beach is a priority project for the state government through an initial investment of $30 million,” the director stated in his decision.

“This funding is expected to foster appropriate private sector development to help create a revitalised and vibrant area.

“The long-term benefits to the community outweigh the potential negative impact that may flow from the grant of the application.”

The director has capped the number allowed in the bar at 750.