Fresh from last month’s $3.5m capital raising, Reedy Lagoon has wasted no time signing up a contractor to begin exploration drilling at its Columbus Salt March lithium brines project in Nevada. Boart Longyear has been contracted to drill a deep, large-diameter core hole that will extract brine samples from depths of up to 1000 metres. 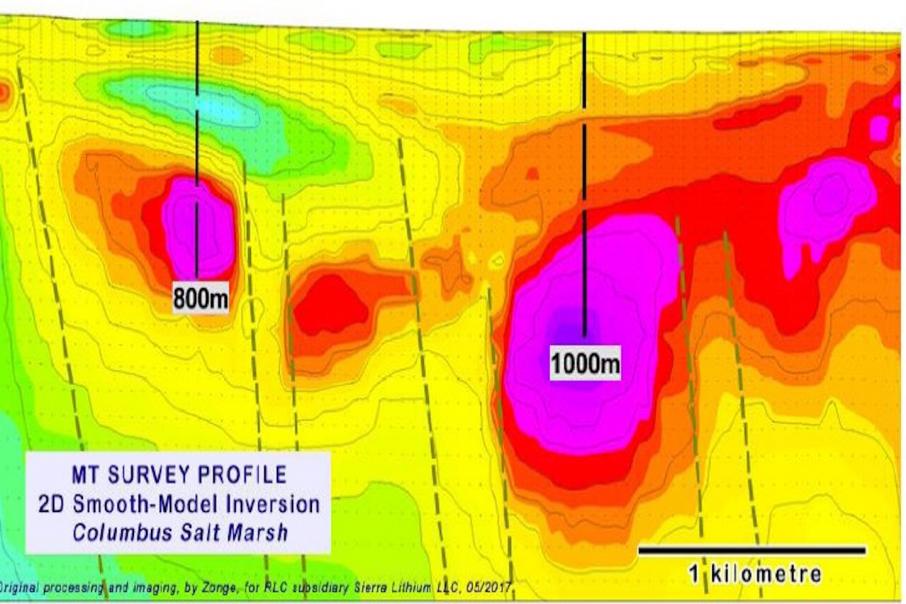 Reedy Lagoon Corporation’s exciting lithium brines play in Nevada is about to be put to the test with the signing of a contract with the world’s biggest drilling contractor to sink a 1000-metre-deep hole into the underwater salt water aquifer.

The lithium explorer has stirred a lot of interest among investors by using some clever geophysics to identify potential for other big lithium brine resources in Clayton Valley near Silver Peak.

Magneto-telluric surveys were used to pinpoint a number of spectacularly anomalous conductive zones that are best explained by salt-rich and potentially lithium rich groundwaters.

Drilling will answer the key question about how much lithium is within these brines, however Reedy is encouraged by relatively recent volcanic activity in the area and believe this could be the source of both the lithium and the salt.

The company said this week its project manager was in Nevada completing preparations for drilling the first hole.

The company said, “The contracted drill rig and crew has experience with drilling in Clayton Valley and has developed specialist drilling techniques for drilling and sampling lithium brines.”

“The drill program at the Columbus Salt Marsh project will investigate to a target depth of 1,000 metres a highly conductive zone extending from 600 metres to more than 1,000 metres below surface.”

Previous geophysics results from the project showed resistivity readings of less than 1 ohm metre, providing some indication that the underground aquifers may be rich with salt and therefore lithium.

Boart Longyear will drill a large-diameter HQ size core hole so that key aquifers can be identified from the drill core. The aquifers will then be pumped and water samples collected at the surface. Reedy has the option of capping the drill hole and ultimately converting it to a producing well.