Red Herring back in the swim

IT took three years and a Herculean battle with the Town of East Fremantle, but Ivan Rutherford has finally completed the $2 million refurbishment of The Red Herring restaurant. 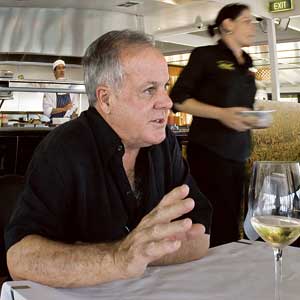 FRESH START:Ivan Rutherford is looking forward to getting down to business, having recently completed a $2 million refurbishment of the Red Herring

IT took three years and a Herculean battle with the Town of East Fremantle, but Ivan Rutherford has finally completed the $2 million refurbishment of The Red Herring restaurant.

With $185,000 worth of new windows looking out over the beautiful Swan River, a new kitchen dedicated to entrees, a refurbished function room and a revamped jetty, the riverside restaurant is out to renew its iconic status in Fremantle.

"It took me three years to get the approvals from the associated bodies and, let me tell you, it was an absolute minefield," Mr Rutherford told Gusto.

For the revamp to go ahead, Mr Rutherford had to gain Aboriginal heritage permission and approvals from the Town of East Fremantle, the Swan River Trust and the state government's liquor licensing department.

"Without having the Aboriginal heritage at the top of the list with a tick, you've got nothing," Mr Rutherford says.

"We took three years, particularly with our problem with the East Fremantle council, which we found to be terribly negative about everything.

"The Swan River Trust eventually came to our aid and said, 'hey this has got to stop ... we've got a 42-year lease here and here's the owner trying to spend $2 million to make this a better public venue'.

"So eventually the Swan River Trust homed in and bang, it all happened.

"If it wasn't for them we'd still be battling East Fremantle council, there's no question; but I've been around long enough and they don't wear me down anymore."

Mr Rutherford bought the old Oyster Beds restaurant in September 1997 and gutted it over a two-month period to create The Red Herring.

Serving an "adventurous" menu with strong Asian influences, Mr Rutherford says while fresh quality food is key to the restaurant's success, so too is attracting and retaining quality staff, including five on 457 visas.

"Over the last 11-and-a-half years, we have tried to maintain a top venue from a maintenance perspective and from a perspective of making sure that people are still comfortable in the environment," he says.

"But it got to a stage where I felt that we were ageing and we were not giving people what they should have been getting in a magnificent location like this, so we spent $2 million doing it up.

"We've got a lot of longevity in our staff too and they're well looked after; they're paid well and they all enjoy substantial tips.

"They are all a dedicated and extremely loyal group of people and go a long way to [ensuring] the success of The Red Herring."

"And you'll see a reflection of that in our food," he says.

"We don't serve up one thing in this building that's not what we say it is."

Mr Rutherford says The Red Herring has a competitive edge over other riverside restaurants in Perth such as The Left Bank Café Bar Restaurant, Cocos, The Bluewater Grill, The Old Brewery and Meads.

"What we have here you can never replicate, it will never happen again," he told Gusto.

"There will be no more buildings of this nature on the Swan River, unless the government changes its policies.

"We're totally different to anybody else."