The best of modern British is finding favour at the Red Cabbage. Adam Orlando reports. 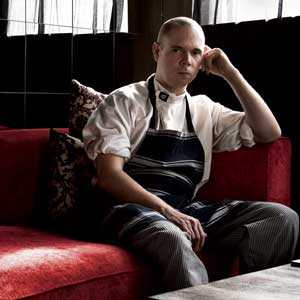 IT'S a major challenge for any business owner to take on an under-performing operation and turn it around; in many cases nothing less than a complete overhaul will do.

So when Scott O'Sullivan took over the troubled Reflections restaurant near the freeway on-ramp in South Perth in 2007, he knew he would have to establish a new brand and create a new menu to win back patrons and raise expectations.

But it took a while for Mr O'Sullivan and his wife, Hazel, to appreciate just how insidious the problems were, and how much effort was needed to rectify them.

"To be fair, the clientele were simply after a half-priced steak and ... because the rents in South Perth are so high, to be here you really need to do something special to make this place work," Mr O'Sullivan told Gusto.

"Everybody used to think, 'Wow this place looks amazing and is in a great spot so it must be doing very well', but when it was Reflections it never did very well, it's never done really well."

Two years on, now with multiple awards and rave reviews, the O'Sullivans appear to have discovered the winning formula with their restaurant, Red Cabbage.

"It took us from July 2007 to October 2008 to change this place and make it work," Mr O'Sullivan says of Red Cabbage, which focuses on modern, British food.

"We didn't advertise, we found it pointless because it was just throwing money out the window and we had such limited funds - there were no extra funds for that sort of thing anyway.

"For a long while it was just us going about our business very slowly; we were very quiet but we were building up quite a lot of steam as we were going along."

With a small team at Red Cabbage, Mr O'Sullivan has been able to keep wage costs down, which in turn allowed him to reinvest in the business.

"We pay everybody else, except Hazel and me, we can keep the big salaries down to a minimum so we just keep reinvesting into the business that way," he says.

"Because we can't invest with funds we invest by labour, and investing by labour means we can do things a lot of people don't bother doing, like making our bread, and we can put in as many hours as we want. So we can really push ahead that way."

Mr O'Sullivan says a further benefit to keeping a small team is that he can stay as head chef, which gave him creative control of the food.

"The more chef-owners there are the more you're going to get in any restaurant; it's simply more special because you know what work goes into it," he says.

"If owners appoint a chef, you're really only getting everything the chef wants. When it's the chef-owner sort of team, you know exactly what you're getting.

"It's more consistent and you know what you're going to get delivered to the table each time.