Recalibrate to heed warnings of history

It is difficult not to sympathise, if not agree, with Pope Francis I’s claim that the spate of conflicts around the globe today effectively form a “piecemeal” World War III. 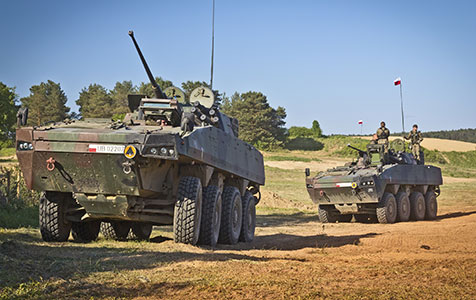 LESSON: Poland has amassed a sizeable force of tanks since liberating itself from the Soviet bloc in 1989. Photo: iStockphoto

It is difficult not to sympathise, if not agree, with Pope Francis I’s claim that the spate of conflicts around the globe today effectively form a “piecemeal” World War III.

“Humanity needs to weep and this is the time to weep,” Pope Francis said in the homily of a mass at Italy’s largest war memorial, a Fascist-era monument, where more than 100,000 soldiers killed during World War I are buried.

Just before visiting northern Italy, he had prayed at a cemetery for 15,000 soldiers from five nations of the multi-ethnic Austro-Hungarian Empire that was on the losing side of the Great War of 1914-18.

My grandfather fought in and survived that war as a conscript in Czar Nicholas II’s army.

“Even today, after the second failure of another world war, perhaps one can speak of a third war, one fought piecemeal, with crimes, massacres, destruction.”

Those words hardly surprise, since over the past several months he has repeatedly appealed for an end to conflicts in Ukraine, Iraq, Syria, Gaza and parts of Africa.

Popes have many essential duties and one on the list is the issuing of such warnings.

Virtually the entire Middle East and parts of Africa today are either at war or precariously close to it, with developments in East and South-East Asia also ominously close.

And the entire oil-bearing Persian Gulf region, the Levant, Egyptian Sinai, Congo, Nigeria, Somalia, and Egypt itself, sit on the brink, akin to the Balkans before August 1914, where the Great War broke out.

The same is true east of the Black Sea, where the Islamic-inhabited Caucasus, long-controlled by Moscow, also teeter on the brink.

And to the Black Sea’s north, Moscow has annexed Crimea and slowly dismembers Ukraine proper, something the now Vladimir Putin-led Russian Federation promised, in the December 1994 Budapest Memorandum, not to do.

Little wonder the Josef Stalin-annexed Baltic nations of Estonia, Latvia and Lithuania are so concerned.

Little wonder also that Poland, since liberating itself from the Moscow-controlled Soviet bloc in 1989, has amassed Europe’s largest tank force.

“To be precise, Poland has 901 tanks as of December 2013,” defence writer Robert Beckhusen says.

“More than half — 541 tanks — are older T-72s dating to Poland’s membership in the Warsaw Pact, when it had the second-largest military in the communist alliance.

“Poland also has another 232 PT-91 tanks, which are considerably more modern Polish-designed versions of the T-72.

“The army’s remaining 128 tanks are (the) modern German-made Leopard 2A4a.

“Altogether, this means Poland has the largest tank force in Europe west of the Bug River.

“In comparison, France has around 400 tanks and plans to reduce its armour force to half that size.

Poland therefore more closely resembles Israel than any of its European neighbours.

Both countries value freedom and the security of their citizenry far more, in part because of their peoples’ World War II ordeal.

No Pole is without a near-relative or one recently deceased who could recall September 1939 when their country was jointly occupied by Soviet and Nazi tank-led invading forces and then dismembered.

And nor should the western Pacific theatre to our north be ignored, where Beijing is moving to grab sizeable tracts of all the waters adjacent to seven ASEAN states.

Disarmed and still disarming Western Europe and the United States can thus be fairly regarded as nations led by individuals with a limited grasp of history, especially recent history.

The same applied to former prime ministers Kevin Rudd and Julia Gillard who, during their disastrous six-year tenure, slashed defence outlays by one fifth – to the lowest in percentage terms since 1938.

They instead squandered many billions of dollars on unnecessary school halls, deadly ceiling insulation and exorbitantly costly imported rooftop solar panels and windmills, to name only four of their crackpot programs.

Although the Tony Abbott-led government got off to an excruciatingly slow and fumbling start, via the gravely flawed Joe Hockey and Matthias Cormann budget in May, where lower income earners not politicians’ benefits, and over-bloated Canberra bureaucrats and bureaucracies were targeted, the corner may have been turned.

Sadly, what appears to have prompted this was not some deep self-realisation across Liberal-National coalition ranks but two far-off tragic events.

I’m referring, of course, to the 38 Australians murdered over Ukraine, due to clandestine Russian aggressiveness, plus Syria’s and Iraq’s descent into Islamic totalitarianism and bloody disorder that threatens to spread.

Let’s hope this is not a passing fad but rather a conversion by our political leaderships towards permanent recalibrated thinking, along lines prevailing in Warsaw and Tel Aviv/Jerusalem since World War II.