Greenland Minerals has announced it will complete its Environmental and Social Impact Assessments for the flagship Kvanefjeld rare earths project in southern Greenland by June, paving the way for it to mine the world’s largest rare earths deposit. The Perth based company revealed this week that it has been working hand in glove with the Greenland Government to make the project happen. 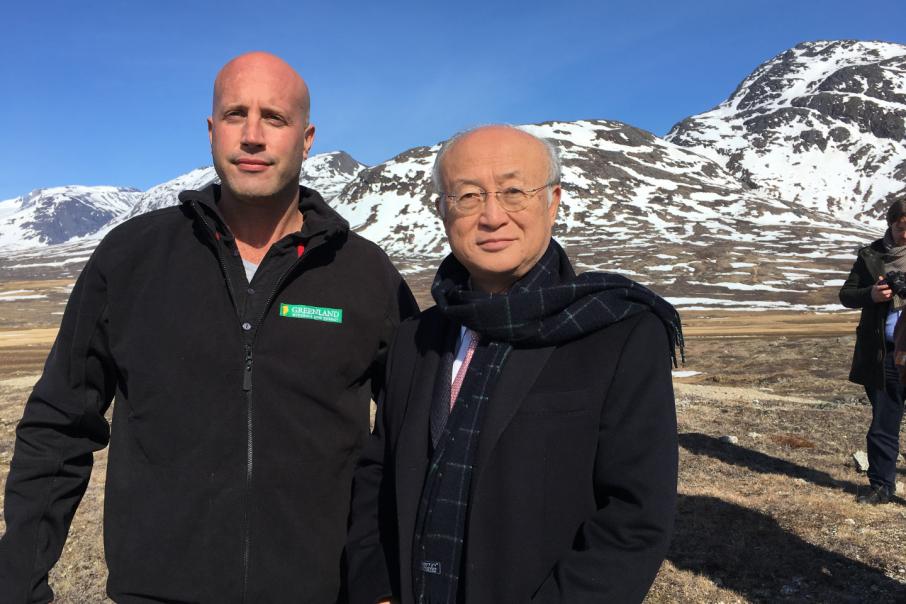 With plenty of boxes already ticked at Greenland Minerals and Energy’s Kvanefjeld rare earths project in southern Greenland, the company is now entering the home straight as it places the final touches on documentation that will lead to key approvals being granted, paving the way for the world’s largest Jorc compliant rare earths deposit to be mined.

The company has announced it is close to completing its updated Environmental and Social Impact Assessments, known as an “EIA” and “SIA” respectively after nearly two years of working hand in glove with the Greenland Government on both documents.

Not only does Greenland Minerals’ Kvanefjeld project boast the largest Jorc compliant rare earths deposit in the world, but it is also a serious uranium play in its own right and is blessed with a swag of zinc and fluorspar credits.

Back in 2016, the Greenland Government signalled that it is open for business and looking to exploit its mineral riches, after the Minister for Industry, Labour, Trade and Foreign Affairs, Vittus Qujaukitsoq, filed documents at the 60th General Conference of the International Atomic Energy Agency, known as the IAEA.

The documents formalized Greenland’s status as a signatory to several international nuclear conventions that are essential for Greenland’s participation in the global civil uranium industry.

In June, of that year, the Greenland Parliament adopted legislation to implement uranium export control procedures in accordance with the IAEA and EURATOM safeguard reporting systems. This will enable the sale and export of uranium from Kvanefjeld in the future.

The major area of focus for the company throughout 2016-17 has been on project permitting at Kvanefjeld and it is now getting tantalisingly close to green lighting the project.

In Greenland, the permitting process is such that study documents are first submitted in draft format and then reviewed and re-moulded under advice from Government and its external advisers before being put out for public comment.

Greenland Minerals has already completed its Maritime Safety Study after input from Government and that document has now been approved by the authorities for public comment.

The company spent 2017 updating and re-moulding its EIA and SIA under the direction of the Greenland Government and management says that both studies are now in the final stages and should be public comment ready by June this year at the latest.

Greenland Minerals has wheeled in a conga line of global heavyweights during the study preparation period to ensure that no stone is left unturned and that all Government direction and advice has been complied with.

The SIA is being completed by revered independent consultants NIRAS from Denmark and Shared Resources Australia.

Additional work programs that supplement the EIA are now concluding with the document being updated and completed by independent Danish consultant Orbicon, who brings extensive Greenland understanding and experience to the project.

International consultancy GHD is also involved and brings international mining and EIA experience along with specific experience in rare earths projects where environmental considerations are similar to those for Kvanefjeld. GHD undertook the 2016 EIA for Arafura Resources’ Nolans Bore rare-earth phosphate deposit north of Alice Springs in the Northern Territory.

Greenland Minerals submitted the original Terms of Reference for the EIA and SIA in the middle of 2011 and has consulted feverishly over the last 2 years with the Greenland Government and multiple advisory groups, to incorporate all new recommendations in order to finalise the documents.

Additional environmental field data was collected last year and site visits were conducted by Greenland’s Environmental Agency for Mineral Resource Assessment and the Danish Centre for the Environment.

Recent meetings held with those organisations in Greenland and Denmark agreed on an action plan to complete the EIA for Kvanefjeld by June 2018.

Greenland Minerals and Energy Managing Director, Dr John Mair, commented on the progress of the permitting by saying; “Following productive meetings this year with the Greenland authorities and the Danish Centre for Environment, completion of the impact assessments for Kvanefjeld is imminent.”

“In addition to the extra studies and data collected in 2017, we are bringing additional global expertise to finalise the documentation in a thorough and rigorous manner.”

“The completion of high-quality impact assessments following detailed government review and guidance, will be an important step forward to a license to operate. The approach we have taken will be a new benchmark for the assessment of mining projects in Greenland.”

In a market update this week, the company also said; “Kvanefjeld can be developed and operated effectively without risk to the environment, workers and local communities, while providing long-term opportunity and benefits, especially local employment to Greenland society at a time when demand for magnet rare earth elements and prices are increasing.”

The company will then finalise its Feasibility Study for the project and revise all capital costs during the fourth quarter of 2018.

Major changes are afoot for the global supply of rare earths, with China looking to cap primary production in 2020, at which point demand for the commodity is likely to surge.

International government policies to transition to electric vehicles and significantly expand wind power capacity continue to drive the prices of rare earth elements that are used in the manufacturing of industrial magnets for electric engines.

Greenland Minerals is hoping to feed the industrial magnet market with its basket of rare earths that includes “neodymium”, “praseodymium”, “dysprosium” and “terbium”.

Kvanefjeld will be one of the largest global producers of these critical materials by 2020 providing a valuable window for Greenland Minerals shareholders to take full advantage of a project that it originally acquired as an historical uranium play back in 2007.

The project contains a staggering 1 billion tonne resource with 108m tonnes already converted to reserves to underpin an initial 37 year mine life and an NPV of US$1.59b.

The company says the project will spit out free cash each year in the order of US$240m at todays rare earths prices and an eye watering US$376m a year at predicted future prices.

Believe it or not those numbers could improve even further once the company has completed a round of technical processing innovation in partnership with major Chinese shareholder and rare earths expert Shenghe Resources Holding Co.

The key takeaway from Greenland Minerals’ market update this week is that the company is perhaps further advanced with its permitting than the market thought and it obviously has a direct line to Government in Greenland which is always handy when you are trying to get a tier 1 project permitted.