There have been plenty of highs and lows in state politics as the major parties turn for home in the race to the state election next March. 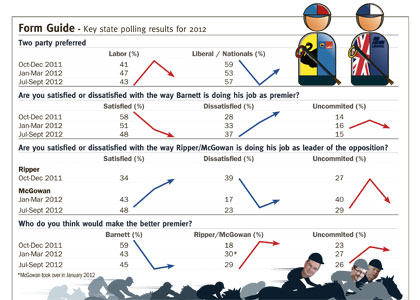 There have been plenty of highs and lows in state politics as the major parties turn for home in the race to the state election next March.

POLITICS is a race for the stayers; it requires stamina and heart to make it all the way to the finish line. And like a good Melbourne Cup, the early leaders often fade as the field tightens in the home straight and makes the dash for the line.

State politics in 2012 has been all about gaining momentum and positioning for the inside run for the final push towards the finish line of next year’s March 9 election.

Due to their own internal and unresolved problems, however, both the Liberal-National government and the Labor Party have struggled to gain a clear ascendency.

For businesses leaders looking at the likely electoral fortunes of the two major parties, tracking their electoral success or otherwise can be a major influence on who they are going to back when making future business plans and investment.

This time last year, the state government and Colin Barnett as premier were finishing the year in a strong position. The premier was still feeling the glow of the Queen’s visit and the success of the CHOGM conference.

Mr Barnett had made modest changes to his cabinet by reinstating the wayward Troy Buswell to the role of housing and transport minister, Christian Porter was largely on top of the Treasury portfolio, and the alliance government held a healthy 59 per cent two party preferred lead in the polls.

The premier’s own approval rating matched that of the government’s at 59 per cent compared to then Labor leader Eric Ripper’s standing as a potential premier at 18 per cent.

But January brought a new jockey into the race, with the Labor Party replacing the veteran Mr Ripper with Mark McGowan, who immediately gave Labor a much-needed kick.

Mr McGowan loosened the reins on the party’s opposition to Sunday trading and softened its stance on uranium mining. He also added much-needed voice to punters’ concerns over cost of living pressures brought about by government increases in power and water charges.

He created a viable point of difference by taking aim at the growing perception of the premier’s policy blind spots and the state’s burgeoning state debt, which had nearly tripled since 2008.

For its part, the government did not help matters by mishandling its early responses.

In February, the government’s assault on Mr McGowan’s credibility culminated in the sacking of the premier’s media adviser, James Larsson, after he was caught emailing journalists images of Mr McGowan’s Rockingham home.

So enamored at the Queen’s visit, the premier made the announcement that the new waterfront development at the Esplanade would be named Elizabeth Quay, which immediately divided community opinion due to a lack of community consultation on the decision.

At the end of the March quarter, Labor had begun to close the gap on the Liberal-National government with a 6 per cent increase in its two party preferred vote to 47 per cent, compared to the government’s 53 per cent.

Punters were clearly beginning to think that the Labor horse wasn’t entirely headed for the knackery and were showing a liking for Labor’s new colours, with Mr McGowan stealing nearly all of the premier’s approval rating.

Mr Barnett’s standing at the end of the March quarter had dropped a staggering 16 points to 43 per cent, all of which had drifted to Mr McGowan, who registered a 30 per cent rating in the ‘better premier’ stakes.

At the mid-way point of the year, the weight in the saddlebags of the government’s perceived lack of ministerial talent and poor political judgment was also causing the government to stumble.

Attorney general and treasurer, Christian Porter, made the shock decision to resign his cabinet posts in favour of a career in federal politics, while unrest at the premier’s own leadership came to a head with his dumping of police minister Rob Johnston and long time friend and education minister, Liz Constable.

This largely bungled ministerial reshuffle exposed the minority government’s fragile and loose alliances in the parliament, and led to Mr Johnston and Dr Constable taking aim at the government’s legislative program.

The pair then set about, with other discontents within the Liberal Party room, to scuttle key reforms to the Corruption and Crime Commission, changes to laws covering prostitution and lobbyists.

The National Party, too, was hit with internal problems, with upper house MPs Max Trenorden and Phillip Gardiner deciding to break with the party after pre-selection issues and disenchantment with leader Brendon Grylls.

To stem the flow, the government took aim at the federal government over the July introduction of the Carbon Tax and the Mnerals Resource Rent Tax in an effort to offset continuing voter disquiet over state increases to power and water charges.

With the dumping of Mr Johnston and Dr Constable from the front bench, the premier reinstated Mr Buswell to the Treasury portfolio and promoted backbenchers Liza Harvey to police and Michael Mischin to the post of attorney-general.

In August, the state government moved to regain its ascendency by releasing the master plan for the new $1.2 billion multi-purpose stadium and transport upgrades at Burswood, and soon after launched its ‘Big Picture’ advertising campaign.

The $1.5 million advertising campaign was launched with the aim of refocusing community attention on the government’s drive to change the face of Perth through an aggressive debt-funded capital works program. At the same time, the state’s economy received its first real shock since the GFC in 2008, with the sudden plunge in iron ore prices sending a jolt through the mining industry; at Fortescue Metals Group, 1,000 workers were made redundant as a result.

By the end of September, the general business and consumer confidence had dived, along with the positive momentum the Labor Party had managed to achieve under Mr McGowan.

While his approval rating had lifted from 43 per cent to 48 per cent over the quarter, the gains the party had made on a two party preferred basis had slipped back from a competitive 47 per cent to 43 per cent.

The Liberal-National government, on the other hand, experienced a bounce to 57 per cent, giving it a comfortable buffer and the hope of increasing its numbers in the lower house (and giving the Liberals the opportunity of governing in their own right).

The Newspoll results caught Mr McGowan by surprise. He responded badly to the results and in a series of media interviews virtually conceded that Labor’s chances at the March 2013 election were beyond his party’s reach.

Seeking to capitalise on Labor’s lack of confidence and policy detail, and in keeping with the big-picture theme, the government started announcing further major capital works projects, including a new inner-city $1 billion light rail network and other road expansion projects.

Labor regrouped from the stumble by its leader and, through strong parliamentary advocacy, forced the government to reconsider its approach to issues around the Peel Health Campus and the bum victims involved in the ill-fated Kimberley Ultra Marathon.

In the final turn for home, however, another of the government’s unresolved problems re-emerged to make the track feel a lot heavier than it should for the Liberal horse.

The fallout from the treasurer’s ill-fated affair with the independent (former Greens) member for Fremantle, Adele Carles, found its way into the media with further claims of improper conduct by the wayward Mr Buswell.

Heavily backed by the premier, Mr Buswell’s behaviour and questions about his conduct as a minister have added a whole new dimension to the race over the coming months, which may well be reflected in the next Newspoll due early in the New Year.

Both parties will no doubt be doing their own polling, but for the rest of us, and especially those in business, this next result may well shorten the odds for either of the two parties.