Are Australian journalists too chummy with politicians to go hard at the big stories? 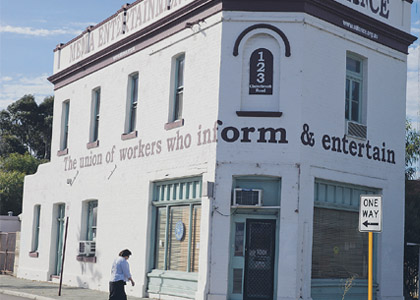 NO SUPPORT: The journalists’ union has been silent over the treatment of Glenn Milne and Michael Smith. Photo: Annaliese Frank

Are Australian journalists too chummy with politicians to go hard at the big stories?

TWO of the four journalists who have trail-blazed the media’s investigation of the Bruce Wilson-Julia Gillard AWU affair have lost their jobs.

Messrs Milne and Smith were forced to move on by the top brass in News Ltd and Fairfax respectively after a furious reaction by Ms Gillard and her office to their renewed interest and handling of the story.

I’m still awaiting a squeak from the journalists’ union over their shoddy treatment.

Nor have we heard any Labor MP speaking out for them.

Where’s their sense of outrage over such terminations?

It’s evident they view defending Ms Gillard, who, whether she likes it or not, remains central to the AWU affair, as more important than backing two journalists doing their job.

Try to imagine Bob Woodward and Carl Bernstein being treated similarly in America.

Try imagining Ben Bradlee, The Washington Posfs editor from 1968 to 1991, ousting them when they were hot on the trail of the Watergate break-in.

Would a ‘furious’ White House reaction have led to Woodward and Bernstein being ousted?

Is it our size? Is it because Aussie editors are tame cats?

Is it because some journalists prefer being repeaters, not dogged reporters, and so won’t look beyond what they’re fed in carefully prepared press releases?

Is it perhaps because our mon-ey-flush federal and state governmental machines employ so many journalists as press secretaries and media advisers?

Or some other reason? Maybe it’s a little of each of these.

Also relevant is that many in the media strongly adhere to leftist thinking, so they’re incapable or unwilling to scrutinise their ideological side when, frankly, it’s been screaming to be thoroughly investigated.

When next at your library, borrow Jacqueline Kent’s book The Making of Julia Gillard.

There you’ll find Kent’s brief account of Ms Gillard’s association with Mr Wilson, as highlighted in a press report during the 2007 election campaign and which was clearly upsetting for Ms Gillard.

“There were headlines such as ‘How Gillard’s Ex Scammed’ and “Con Man Broke My Heart’ and a repetition of the allegation that some of the money had been used to renovate Gillard’s house,” Kent writes.

‘The story broke the Sunday before election day, and we knew it was coming,’ Gillard says now.

‘It was run by News Ltd.

‘I was obviously concerned about my parents.

‘Over the next two or three days I received phone calls from many of the biggest names in the Canberra press gallery expressing absolute disbelief that such things could be said.

‘Nobody followed up the story. It just died’.”

Kent says Ms Gillard received an apology from Sydney’s Sunday Telegraph “for its allegation that Gillard had used funds scammed by Wilson”.

Of greater interest is the admission of very close links between “many of the biggest names in the Canberra press gallery” and Labor’s then deputy leader, now prime minister.

Some may say that’s an endearing, even egalitarian, feature of Australian politics, and so shouldn’t be frowned on.

There’s certainly something to be said for that.

But wasn’t such intimacy going too far? Are things any different now?

Isn’t the media supposed to be fearless in reporting?

Is it perhaps because it’s failed to do precisely that, that so many in the know turned elsewhere to ensure Ms Gillard’s Wilson-Blewitt years were not fully scrutinised.

There’s no excuse for it not having been done long ago.

After all, her name first surfaced in Victoria’s parliament in October 1995, as she was departing law firm, Slater & Gordon.

“All attempts to find him have come to nothing.

“What did Mr Wilson do when he found out that his actions had been discovered?

“The first thing he did was to seek legal advice from the union’s solicitors, none other than Slater & Gordon.

“From whom did he receive that advice?

Mr Gude certainly had a good source. Who?

Michael Smith, who has continued his investigations into the Wilson-Gillard affair, recently contacted him and learned it was “a very senior union official”.

“Mr Gude said that the union official wanted to remain anonymous and he continues to respect that confidentiality,” Mr Smith said.

“Also present at the meeting with Mr Gude and the union official in October 1995 was a Labor Party MP,” Mr Smith continued.

Whoever that official and the Labor MP were, they had clearly first opted against involving the press to air the Wilson-Blewitt-Gillard affair.

In retirement he’s turned to researching the history not of the BLF, but the AWU, and is determined to uncover all about the controversial Wilson-Gillard era.

An interesting idea - researching the AWU, not the BLF.

Perhaps that idea came from someone who had been associated with many AWU personalities, especially in Western Australia, during the 1990s and now wished to see their activities investigated and fully disclosed.

Without Mr Nowicki we wouldn’t be as well informed about the still-to-be-fully-assessed Wilson-Blewitt-Gillard relationship.

He’s even been generous enough to pay Mr Blewitt’s flight from Malaysia to Melbourne so he could submit a sworn statement to Victoria’s police.

The press didn’t get off to a good start on this issue, which, sadly, includes two shameful career fatalities.

Many others - and I’m not only referring to Mr Gude’s union official and Labor MP, Mr Nowicki, and Mr McClelland - have played a crucial role in helping ensure it doesn’t die, as it nearly did between 1995 and 2007.

Things have moved so swiftly and revealed so much since early last month, meaning Labor’s backbenchers won’t be relishing entering the coming election campaign with Ms Gillard leading.

But unlike the ousting of Kevin Rudd, Ms Gillard will fight to the bitter end to stay leader, which means tough plotting awaits Labor’s increasingly jittery MPs over the Christmas break.

Whether she wins, loses, or draws, I anxiously await a judicial inquiry, and Harry Nowicki’s book.