Russia’s actions in Ukraine are part of a broader strategy by the Kremlin to assert greater influence in the region. 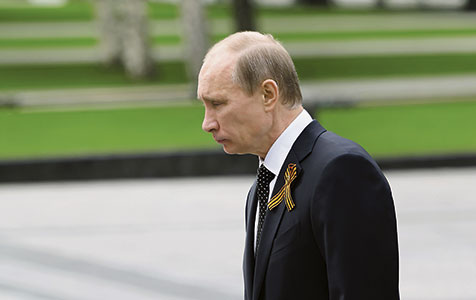 Russia's two-time president, ex-KGB colonel Vladimir Putin, is doing to Ukraine what his Kremlin predecessor, Jozef Stalin, and Adolf Hitler did to Poland in September 1939 – dismembered it.

When I first heard reports of last December’s outbreak of the demonstrations in Kiev, I concluded they’d be suppressed and little would come of them.

Then three weeks ago I heard a young Ukrainian demonstrator interviewed on the BBC who said he’d shut down his three small businesses because he was sick of being overtaxed and harassed by thuggish bureaucrats and police.

“I just want to live in a normal country,” the demonstrator said.

That got my attention, because it’s precisely what so many 1980s Poles, who manned Solidarnosc’s determined ranks, claimed.

My view of the goings-on in Kiev’s Maidan (Independence Square) swiftly changed.

I now expected either the collapse of the dictatorial government of Wiktor Yarukovych, as happened to the regime of Polish Bolshevik general Wojciech Jaruzelski, or perhaps the start of protracted negotiations.

But unlike Mr Putin today, then-Soviet leader Mikhail Gorbachev had stayed aloof from the troubles in Warsaw that eventually led to the end of Communism there, to be followed by similar collapses across the Soviet empire, including Moscow.

Why then has Mr Putin opted for the path he has?

Does he fear a post-Solidarnosc chain reaction?

And does he have a blueprint for the future?

If so, what is it and from whence does it come?

Here I’m indebted to Eastern European expert Timothy Snyder, Yale University historian and author of the bestselling study of the fate of the Poles, Jews, Ukrainians and Belarusans during World War II – Bloodlands: Europe Between Hitler and Stalin.

The event that ignited Kiev’s demonstrations was the refusal by the now-ousted Yanukovych to enter an association with the European Union, because he and Mr Putin seek another type of union.

Progressive young Ukrainians saw subsidies offered by Moscow over the years to prevent Kiev’s corrupt, floundering, oligarch-dominated economy collapsing for what they were – a road to totalitarianism.

That’s why so many young Ukrainians have been fleeing westwards since the 1990s.

Finally, those who couldn’t flee converged on Independence Square and refused to compromise.

They sought another future for themselves and families.

Mr Putin, however, has other ideas, driven by a desire to create a Eurasian Union comprised of the five central Asian ‘stans’ (once Soviet republics), Ukraine, Belarus, and Russia, something unwanted by virtually all Ukrainians since it’s a return to a dark and squalid past.

To them, it’s the European Union or nowhere.

“The protesters represent every group of Ukrainian citizens: Russian speakers and Ukrainian speakers (although most Ukrainians are bilingual), people from the cities and the countryside, people from all regions of the country, members of all political parties, the young and the old, Christians, Muslims, and Jews,” Professor Snyder writes.

“Every major Christian denomination is represented by believers and most of them by clergy.

“The course of the protest has very much been influenced by the presence of a rival project, based in Moscow, called the Eurasian Union.

“This is an international commercial and political union that does not yet exist but that is to come into being in January 2015.”

Professor Snyder says this union is based on an ideology devised by a Russian political scientist Aleksandr Dugin that “proposes the realisation of national bolshevism.”

“Rather than rejecting totalitarian ideologies, Eurasianism calls upon politicians of the 21st century to draw what is useful from both fascism and Stalinism,” he said.

“Eurasianism is not only the ideological source of the Eurasian Union, it is also the creed of a number of people in the Putin administration, and the moving force of a rather active far-right Russian youth movement.

“For years Dugin has openly supported the division and colonisation of Ukraine.

“The point man for Eurasian and Ukrainian policy in the Kremlin is Sergei Glazyev, an economist who, like Dugin, tends to combine radical nationalism with nostalgia for Bolshevism.

“He was a member of the Communist Party and a Communist deputy in the Russian parliament before co-founding a far-right party called Rodina, or Motherland.”

The Dugin-Glazyev vision is for a revamped Kremlin-dominated fascist-Bolshevik amalgam without human rights, pluralism and tolerance.

“Glazyev’s book, Genocide: Russia and the New World Order, claims that the sinister forces of the ‘new world order’ conspired against Russia in the 1990s to bring about economic policies that amounted to ‘genocide’,” he said.

European values, which Solidarnosc achieved for Eastern Europe – temporarily for Ukraine and Russia – terrifies those seeking to impose a fascist-Bolshevik order alongside a Eurasian Union.

Remember Mr Putin’s 2005 state of the nation address to the diet (parliament) that described the Solidarnosc-inspired toppling of Eastern Europe’s Stalinist order a tragedy.

“First and foremost it is worth acknowledging that the demise of the Soviet Union was the greatest geopolitical catastrophe of the century,” he said.

“As for the Russian people, it became a genuine tragedy.

“Tens of millions of our fellow citizens and countrymen found themselves beyond the fringes of Russian territory.”