The people of Perth are taking to burger joints with gusto. 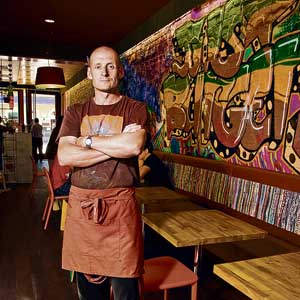 BATTLE lines are being drawn along the bustling restaurant strip of Leederville in what's shaping up as a burger war between well-established Retro Betty's and new kid on the block, Jus' Burgers.

And the winners, it seems, will be the burger-loving punters of Perth.

Several funky new burger joints have opened across Perth in recent years, each with its own sense of style and taste, but the latest player is the brainchild of British-born chef, Justin Bell.

And Mr Bell is happy to take on all comers.

"I thoroughly will go into battle with everyone in town," Mr Bell told Gusto.

Mr Bell is a professional chef with 20 years' experience, and has opened restaurants including Monza in Leederville, Bunker Bay in Dunsborough, and even El Pamposo in Hong Kong.

Most recently he finished up a stint as executive chef at the Crowne Plaza hotel.

But it's his passion for good quality food and the freedom it can offer him and his family that led Mr Bell away from saucepans and cutlery and onto the grill at Jus' Burgers.

"I think there was an angle in the market to do something that was a little bit better, hopefully, than what was currently in a) Leederville and b) in Perth," Mr Bell said.

"Being from London, I know its 'gone off', to use an Aussie term, the last five years."

And to date Jus' Burgers has been doing just that: going off.

"Averaging just under 1,200 burgers per week is quite good numbers, so financially we're travelling quite well and just continuing on and building up the team."

But Mr Bell hasn't jumped head first into this venture without appropriate research and investigation.

In fact, you might say he's supersized his knowledge of everything burger-related.

"I spent 18 months on my research, so this didn't happen overnight," Mr Bell says.

"[I] popped home to London to do a lot of market research and managed to get day gigs in all the burger bars over there just for a bit of research to see because, of course, if I was going to invest my money, I needed to make sure it was as risk-free as possible.

"Stats suggest eight out of 10 places go down in the first year. Well, I definitely don't want to be part of that mix."

Mr Bell is quietly confident his extensive research will pay off but he isn't looking too far ahead just yet in terms of plans for expansion.

"I'd be a bit naïve to commit to timeframes but I do anticipate that the burger wars are on. I want to win and I think I've got a concept and a model template that can and will succeed," Mr Bell says.

"We're trying to be non-franchisey, something that's completely non-cheesy.

"So I'm sure everyone is doing ok, we're just quite cool with our product and we're happy with what we're doing; but like I say, bring it on."

It's a call to arms predicted by Retro Betty's owner, Michael Wiss, more than five years ago.

"It was obvious to me and I guess we are now in the middle of burger wars, but it hasn't affected us," Mr Wiss says.

"If anything, I think it's probably increased our business.

"It actually helps us sharpen our pencil in some respects.

"So I just think it's very good for us that another burger place has opened and I see it as very healthy and it provides a category where we're the market leaders."

It's a sentiment echoed by Flipside Burger Bar owner Hamish Fleming, who opened his second restaurant in August last year on Cambridge Street in Wembley.

"Jus' Burgers is great but we're in a different space," Mr Fleming says.

"We're more a local neighbourhood restaurant and they're in Leederville.

"Leederville is a destination spot, where our local regulars come down for a quick bite and for take-away."

Mr Fleming, whose original store in North Fremantle continues to gain popularity, admits to having already paid his latest opposition a visit and is very positive about the future of Perth's burger battles.

"Definitely it's a positive, it's about increasing numbers overall," Mr Fleming says.

"Like Starbucks is a real positive for the coffee industry in places like Asia because independent coffee companies have benefited from Starbucks coming and getting all these people who didn't drink coffee to start drinking coffee.

"What's happening with Jus' Burgers and a few more burger joints is the concept of going out for a quick, quality bite to eat is getting more and more embraced by Perth people.

"So there's plenty of room for more players to enter the market."