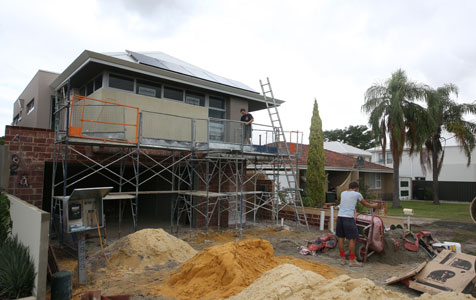 The WA arm of the Urban Development Institute of Australia has warned the residential land market is at risk of overheating if action is not taken to fast-track the release of new land.

The results of the UDIA’s latest Industry Predictions Survey, which was supplied exclusively to Business News, point to improving conditions across the construction, development and allied industries and a broad optimism looking ahead to the next six months.

However the data, which was compiled using information from 130 respondents working in the urban development industry, also pointed to some potential bottlenecks, particularly in the area of land supply.

UDIA WA chief executive Debra Goostrey said it was disappointing the state and local authorities had not used the recent downturn in the residential property sector to streamline their approvals processes.

Ms Goostrey said developers she spoke to were already trying to push through more stages of residential estates to keep up with demand.

“They are pushing out as much land as they can but the problem is that getting through the system is still taking way too long,” Ms Goostrey said.

“UDIA is working with a whole range of agencies to try to streamline things, this isn’t just about the Department of Planning this is about all the agencies, environment, water and service agencies.

“But none of them are going to arrive in time to avert the problems we are facing in the very near future.”

Perth is grappling with a housing shortfall, according to PRM Property Group managing director Steve Robertson partly as a result of the “hot” rental market.

PRM is a small residential developer and its estates include Banksia Grove to the north of Perth as well as Meve at Beeliar in the southern corridor.

Mr Robertson said the residential rental vacancy rate had slid from almost 5 per cent in 2010 to under 2 per cent this year.

“Should this trend continue, the medium rent will inevitably rise at a much greater rate resulting in people looking at alternative housing options,” Mr Robertson said.

“However, frustrating the delivery of vacant land are the time and cost implications of bureaucratic processes being imposed on the whole industry.”

In addition to concerns about land supply, the Predictions Survey has also highlighted likely increases in home-building schedules, which will translate into increased costs.

This increased building activity is expected to put pressure on construction schedules, however, the variety of construction and the emergence of new building techniques are expected to keep a lid on any blowouts.

“Skilled trade has come back from the north and the indications are the capital works programs there are not going to turn around overnight,” Mr Roberts said.

“James Price (Point) is a good example, everyone was gearing up for that and there were a lot of local business and interstate people who had moved up that way and now they will be thinking differently.”

The forecast construction growth will be spread across a number of projects, including urban infill, medium and high-density projects.

This variety is expected to go some way to contain labour shortages as the different projects require different skills and trades.

Despite this, Mr Roberts said he expected residential construction costs to increase by 3 to 4 per cent a year.