With a large Muslim population of its own, Vladimir Putin is hoping to counter the threat posed by Islamic terrorists before unrest begins inside Russia, while also propping up the Syrian regime. 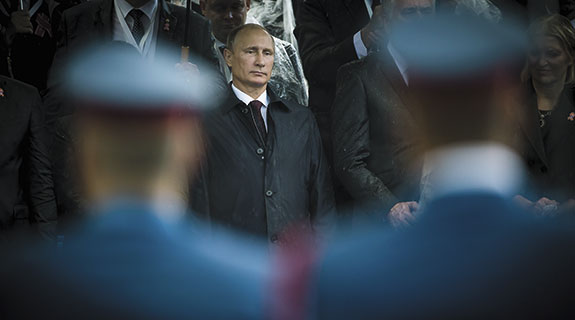 With a large Muslim population of its own, Vladimir Putin is hoping to counter the threat posed by Islamic terrorists before unrest begins inside Russia, while also propping up the Syrian regime.

Although Australia is at war in the Middle East for the fifth time since 1915, the lack of substantial reporting of this conflict by our media ensures few are truly aware of what’s at stake.

To make matters more bizarre, we’re allied with both sides in this bloody Islamic contest.

Because RAAF aircraft, with those of the US Air Force, are targeting the Sunni-manned Islamic State (ISIS) occupying Iraq and Syria, we’re aligned with belligerents Iran and Russia, which wish to destroy ISIS since it is fighting Syria’s pro-Shi’ite president, Bashar al-Assad.

But because we’re allied with the US, whose president detests President al-Assad, we’re aligned against Iran and Russia, which seek his survival.

Furthermore, why far-off Australia and the far-off US are participants is puzzling, especially since our efforts to bring democracy to Saddam Hussein’s Iraq failed so comprehensively.

Is a brighter outcome expected in a post-al-Assad Syria?

It’s probably because of this truly quirky array of alignments, and no idea what a post-al-Assad Syria would be like, that our politicians and media steer clear of speaking about our 700-strong air contingent operating in the Middle East.

But, the involvements of Iran and Russia are easier to explain.

In the case of the former, which we’re assisting, it’s a matter of Iran’s leadership seeking to link-up directly with their Lebanon-based Shi’ite Hezbollah allies through Iraq and Syria, after which Iran’s Revolutionary Guard would be better positioned to assault Israel so it can be expunged from the Middle East.

Although one cannot discount that his primary or hidden aim may be to ensure Russia acquires naval and air supremacy over the Eastern Mediterranean and Levant, there are a few historic reasons that shouldn’t be ignored.

One of the few to publicise these is veteran American reporter and Russian affairs historian, Marvin Kalb.

He’s pointed out that during a recent CBS/TV interview President Putin claimed he’s backing Syria because of the threat posed by the nearly 2,500 Russian Muslims in ISIS’s ranks.

More than 20 million of Russia’s 144 million citizens are Muslims who are concentrated in Russia’s Caucasus region, an area easily accessed by land from the Middle East.

“We are,” President Putin said, “better off helping Assad fight them on Syrian territory.”

“In the 19th century, Leo Tolstoy and other Russian writers penned popular stories about Russian officers fighting wild Islamist warriors in the Northern Caucasus,” he says.

“This was a common theme in many books – the Slavic officer battling the Islamist renegade, one fighting to protect Christian civilisation, the other determined to uproot it.”

When asked how he got that figure he replied: “Let’s count: the Mongols, Napoleon, Hitler, and now the Islamic State.”

Last month, President Putin said: “The streets of Leningrad taught me one thing: If a fight can’t be avoided, it’s best to hit first.

“Better to fight them there than wait for them here.”

“Russians also recall the Basmachi of Central Asia, an almost forgotten tribe of Islamic State-like warriors who formed their own caliphate in the 1920s, rising against Russian domination,” Kalb says.

“They were mercilessly slaughtered by Russian troops a decade later.”

Those actions certainly cast doubt over his claims for having launched a pre-emptive, rather than expansionist, move in the Middle East.

Even so, they cannot be ignored.

Nor does Kalb regard the Russian president’s teenage street-fighting days in Leningrad as a sound geopolitical precedent.

He says Russia’s media is ablaze with reports of successes in Syria with President Putin “leading a quasi-holy alliance with Shi’ites in Iran, Iraq, and Syria”, which is baffling and angering Russia’s predominantly Sunni Muslims.

“Even if Russia had not entered the Syrian war, another Chechen-type eruption was a looming threat – and now, the possibility of a revolt by angry Muslims is even more real,” Kalb writes.

“Indeed, it may only be a matter of time.

“That is why Putin’s gamble in Syria is so risky.

“He may be further alienating Russia’s own Sunni Muslim population, and inciting the very violence he had hoped to avoid.”

Also worth noting is that President Putin’s continued dabbling in Ukrainian affairs sparked the ousting of its pro-Moscow president Viktor Yanukovych, who subsequently fled to Russia, after which President Putin bankrolled the civil war across eastern Ukraine.