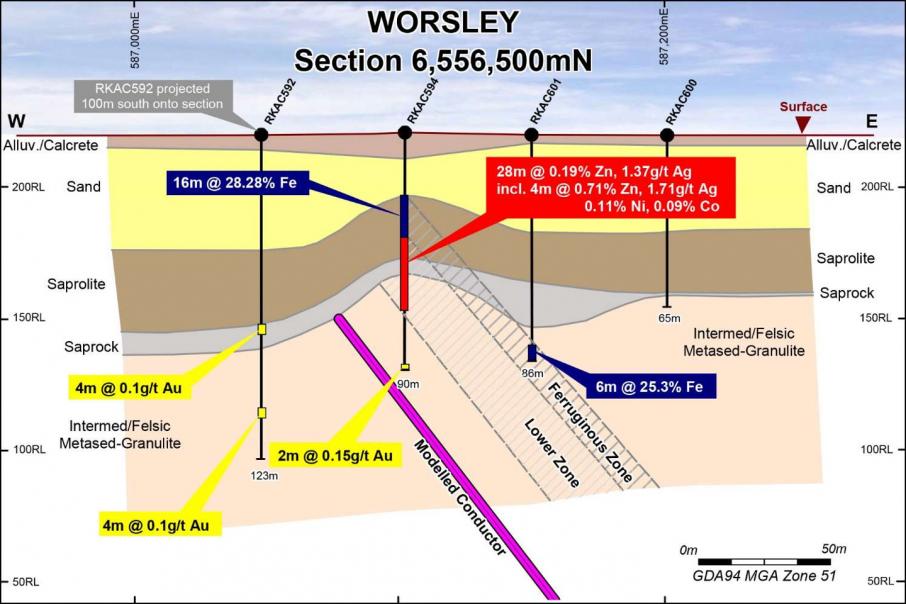 Multi-commodity exploration company Legend Mining looks like it might have just snagged the top of something interesting, based on the results of its latest infill aircore drilling at the Worsley prospect in the emerging Fraser Range region of WA.

According to the company, strongly anomalous multi-element geochemical assays from the latest drilling intersections have indicated potential proximity to a volcanogenic massive sulphide, or “VMS”, ore system.

A further four holes also contained anomalous gold results up to 4m @ 0.24g/t gold from 56m down-hole in a wide halo around the main base metal occurrences.

This is considered important because the footprint and zoning around VMS ore systems can be quite extensive in base metal and precious metal mineralisation.

Even more encouraging is that the new zinc-silver drilling results are located directly above a strong, modelled geophysical electromagnetic, or “EM”, conductor at Worsley, that is interpreted to extend significantly to depth.

Legend Managing Director Mark Wilson said: “These results have elevated Worsley to Legend’s best VMS prospect at our Rockford project. Independence Group have previously highlighted the VMS potential in the region with their Andromeda discovery in July 2018.”

“The mineralised footprint we have identified is in the vicinity of the top of the modelled conductor, which is a further positive feature. We will need to do more of our innovative EM surveys to better model the conductor as the current 500m line spaced work is insufficient to properly design diamond drill testing.”

“This EM work will be commissioned as a priority and will be done in conjunction with the EM work required at the nearby Crean prospect”.

The company will now initiate further moving-loop EM ground surveys at a closer line spacing to better define the dimensions of the identified conductor at Worsley, ahead of diamond drilling programs to test for the potential presence of VMS mineralisation.