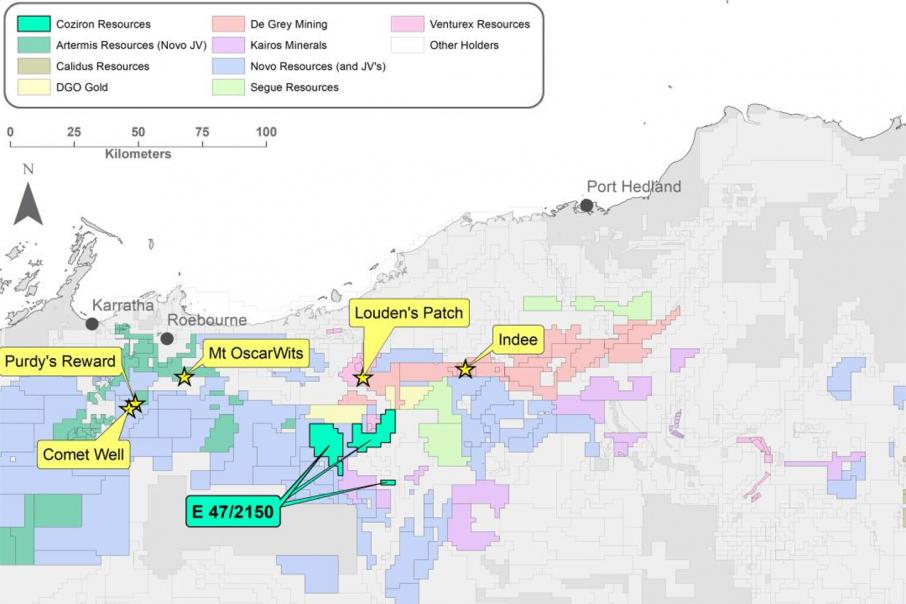 Coziron Resources is back on the ground in the Pilbara and has this week commenced exploration activities at its prospective Croydon Top Camp gold project, 100km southeast of Karratha in WA.

In July, the company outlined the discovery of over two hundred gold nuggets in the area weighing nearly 2.5 ounces, which followed on from other prospecting reports from 2018 where gold nuggets weighing 1.7 ounces were recovered from an adjacent area.

A review of this work has outlined potential in the Middle Valley area, 1km west to 2km north of Croydon Top Camp, with Coziron prioritising geological mapping and surface sampling in that region, where gold-bearing veins align with major faults visible from aerial imagery.

Other site activities will include additional soil sampling focussing on existing drill-ready targets at the Croydon Top Camp prospect, where a 2,000-metre reverse circulation, or “RC”, drilling program is being prepared.

To fund the work, the company recently raised $3m via an oversubscribed placement.

According to Coziron management, the sustained rise in gold prices is an added impetus to refocus its exploration at Croydon Top Camp.

De Grey Mining is evaluating lode-style gold deposits near the Indee Mine and an intrusion-related deposit at Towerana and hence, Coziron’s upcoming exploration programs appear timely given the emergence of the area as a prospective, yet underexplored, new gold province in the Pilbara.

Importantly, Coziron’s Croydon Top Camp project region contains significant pathfinder element anomalies in association with the gold, which has been instrumental in vectoring its exploration efforts in the district.

According to management, the geochemical pathfinder element suite seems to indicate a structurally-controlled deposition of gold mineralisation from an intrusion-related geological system.

“These structural gold targets are well defined from extensive historical field work and sampling and are located in a region surrounded by multi-million ounce gold resources.”

“With a focus towards near term gold exploration results from the Croydon Top Camp project, Coziron is well placed to benefit from the current strong gold sentiment.”

It is onwards and upwards from here, with the company anticipating its first assay results from preliminary field work and sampling programs shortly and the completion of Aboriginal heritage surveys ahead of drill pad preparation for the upcoming RC program.