On the back of a recent find at its Paradise alluvial gold prospect in the Pilbara, TSX-listed conglomerate gold pioneer, Novo Resources, has uncovered a new, fresh, shallow, alluvial gold-bearing channel at its Egina project in WA’s northwest. Novo said the new channel that ties in well with its gold-bearing gravel terrace geological model has a width of 350m and a gravel thickness of 0.5-2.0m. 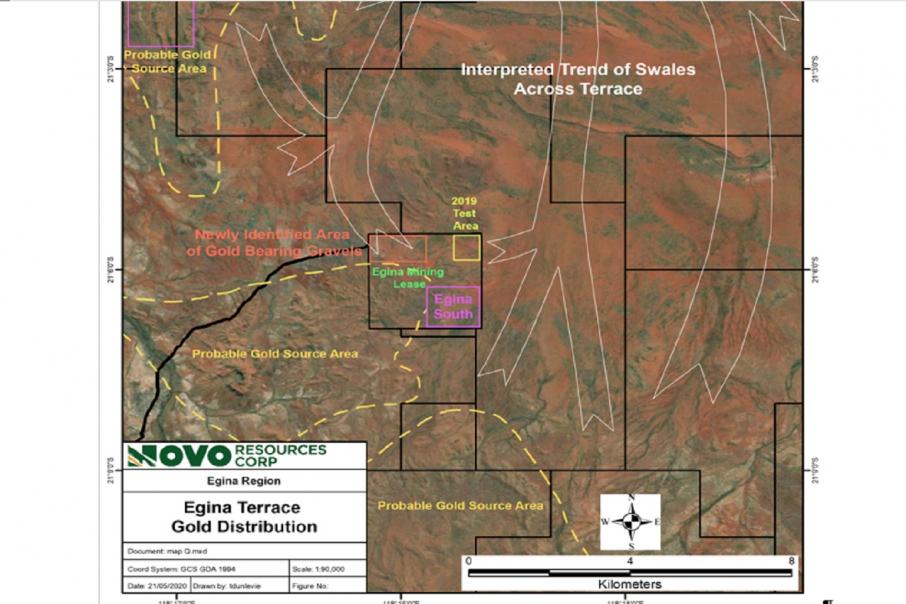 On the back of a recent find at its Paradise alluvial gold prospect in the Pilbara, TSX-listed conglomerate gold pioneer, Novo Resources Corporation, has uncovered an exciting new shallow alluvial gold-bearing channel at its Egina project in WA’s northwest.  Novo said the new channel that ties in well with its gold-bearing gravel terrace geological model is about 350m wide with a gravel thickness of 0.5-2.0m.

Novo said the new channel, or “swale”, is located in the north-western quadrant of its Egina mining lease and is situated a few hundred metres west of the swale sampled last year.  It also appears to extend off the mining lease onto its adjacent exploration lease.

The company’s previous assays of alluvial gravels from Egina returned a solid 0.84grams of gold per cubic metre from one tonne bulk samples that are proving better than traditional drilling in sizing up its conglomerate gold opportunity.

Novo has been using its mobile alluvial Knudson test plant for processing the dirt and taking gold particle counts from the processed material.  The company also said the vast majority of gold recovered was in the form of coarse gold nuggets of greater than 1mm in size.

Novo has been digging trenches between 50 m and 100m in length and between 1m and 1.5m deep to extract the bulk gravel samples.  The technical team then checks each excavator shovel from the base of the trench for gold nuggets before the bulk sample is taken away for processing.

Novo said it was deploying ground-penetrating radar to identify swales at both the Egina and Paradise prospect areas and the results so far appear to be speaking for themselves, although assays from the bulk samples are still pending.

The company is exploring an area of at least 10km by 17km north of a series of low hills that mark the southern edge of a terrace containing its leases.

The company’s technical team believes these shallow, gold-rich gravels have been eroded from outcrops of the Fortescue Group conglomerate formations to the south of the latest Egina swale discovery.

Novo President and Chairman, Dr Quinton Hennigh said: “We are starting to see a pattern of gravel gold distribution that appears robust around Egina. Recently discovered broad gold bearing swales discovered at Paradise likely tie back to areas further south. This implies we have a network of swales nearly 10 km wide and 17 km from south to north to further explore around Egina.  We have many other target areas to test across our terrace holdings this year. We are just getting started.”

Novo is clearly now focusing its efforts on the extent of the alluvial gravels that are shallow and quick and easy to dig as it appears to have sorted a processing flow sheet to extract concentrations of gold that have the potential to be economic.

With more, longer and wider channels being discovered almost every week, Novo’s looks to be on track to turn ‘scratching the surface’ into a potentially commercial, strip mining and gold sorting operation.