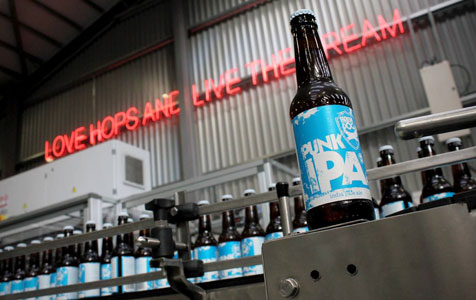 Beverage importer Phoenix Beers has added Scottish brewery BrewDog to its growing stable of international craft beers, signing an agreement to distribute about 1,000 cartons per month of the highly-regarded brews across Australia.

The arrangement will initially be for three years, with Phoenix expecting the partnership to continue for the foreseeable future.

Phoenix said BrewDog beers, which include its popular Punk IPA, 5am Saint and its IPA is Dead series, will be available at all good beer stores and craft brew-pubs.

“Like other beer geeks across the land, we’re well aware of BrewDog’s estimable charms.

Mr Barac said BrewDog had developed a cult-like following in Western Australia since it was established in 2007.

The brewery was set up by James Watt and Martin Dickie, who said they were sick of the mass-produced lagers that dominated the UK beer market.

Mr Watt and Mr Dickie initially sold BrewDog beers at local markets and out the back of a beat-up old van.

The brewery created a media storm in 2008 after creating the UK’s strongest ever beer, the 18.2 per cent alcohol Tokyo Imperial Stout.

In 2009, BrewDog established Equity for Punks, which attracted the interest of more than 1,300 investors keen to buy into the fast-growing beermaker.

Today, BrewDog brews more than 53 million litres of beer each year, has 14,208 shareholders and 13 BrewDog bars across the UK, Europe and Brazil.

Phoenix Beers has been importing and distributing craft beer in WA for more than 10 years, representing nearly 40 breweries and cideries across the world, including celebrated international brands such as Germany’s Weihenstephaner and California’s Sierra Nevada Brewing Co.