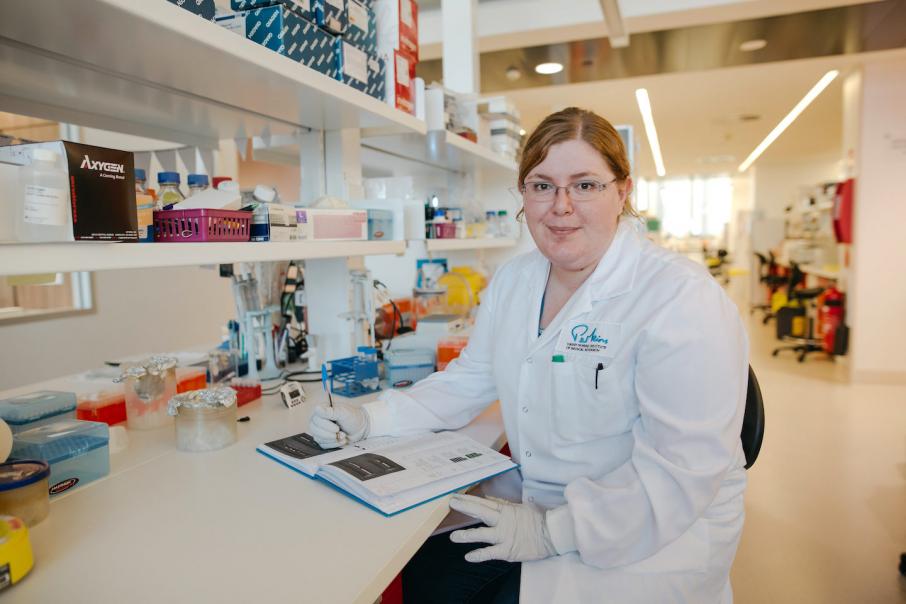 The search for disease genes that affect people’s ability to perform voluntary movements is taking Perth scientist Sarah Beecroft, and precious genetic material from Australia and New Zealand, to London.

Having conducted genetic sequencing on Australian and NZ samples at the Harry Perkins Institute of Medical Research, it’s now time to take her samples to a team in London to learn new techniques that Sarah hopes will allow her to identify more new disease genes.

PhD student Sarah Beecroft has one more year to run on her PhD at the Harry Perkins Institute of Medical Research. Her research to date has identified the disease genes for multiple families affected by a range of neuromuscular diseases.

“In London I will work with a team at University College to learn particular techniques they have developed which we think will help us identify the cause of disease in further patients from Australia and New Zealand.”

“If confirmed it will provide Australasian families vital information about the condition affecting them.

Sarah’s PhD studies are funded by the Liuzzi Foundation, a philanthropic trust in Melbourne established after the death from a rare neuromuscular disease of successful businessman and philanthropist Fred Liuzzi.

Mr Liuzzi progressively lost movement in every muscle in his body before he died. His four adult children established the Fred Liuzzi Foundation, which is a not-for-profit charity that works to reduce the impact of rare neuromuscular disease in Australia.

The connection with the Liuzzi Foundation has given Sarah access to a large rare bank of muscle tissue that has been collected in Victoria over 20 years by neuropathologist Professor Catriona McLean.

“In the past two years I have been analysing the genetic material in muscle biopsies from more than 40 Victorian families.”

“That provided a study population of 150 individuals suffering neuromuscular diseases. Several new discoveries have been made from having access to such a concentrated source of genetic material, including two novel candidate muscle disease genes.” Sarah said.

“The work conducted in the lab ranges from the microscopic to big data analysis but the purpose of our work is very much focused on making a difference for families.”

“Families from around the world for example want to know if the disease that’s affected their baby can be found.”

“If we can identify a rare disease gene, then a family with an affected child can find out what to expect during their child’s life and they can make choices to ensure future children aren’t born with the same disease. It’s very moving when your research can provide that information,” Sarah said.

Most couples have no indication they are at risk of having a child with a genetic condition.