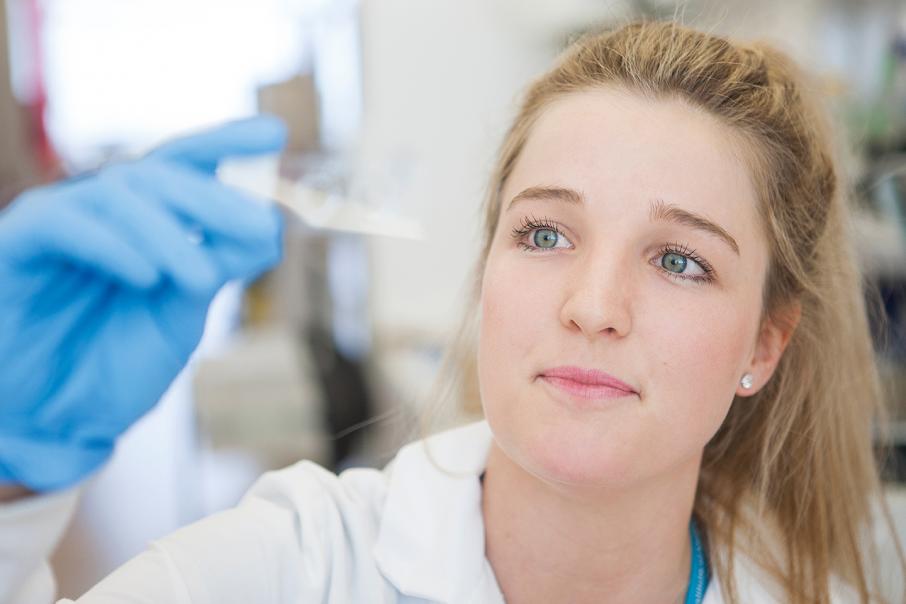 Around the world from the BBC World News to the New York Post, the Brussels Times to NichiGo Press Japan, the work of two Perth research groups captured global attention.

Such success came in part because the discoveries were published in two of the world’s most prestigious journals, npj Nature Precision Oncology and the New England Journal of Medicine, not something that happens every day.

However, they probably went viral because they were both such imaginative ideas.

One was the discovery that honeybee venom kills breast cancer cells. This remarkable research was carried out over the past 4 years by a young scientist, who is now only 26 years old.

Ciara’s research involved collecting first Perth honeybee venom, then the venom from honeybees in London and Dublin, and bumblebee venom, and testing it on the cells of the main breast cancer subtypes and on healthy cells.

She found that honeybee venom is remarkably effective in killing aggressive forms of breast cancer cells, including cells from hard-to-treat "HER2-enriched" and "triple-negative" cancers.

Critically, there was minimal impact on healthy cells.

The effects of the different honeybee venoms were remarkably similar, regardless of where the insects came from, but bumblebee venom barely worked at all even at very high concentrations. Honeybees are the anti-cancer queens!

The honeybee venom was very potent. It contains a molecule called melittin, which accounts for about half of the dry weight of the venom.

Melittin’s a small, positively-charged protein and it speared cell membranes creating pores that electrically destabilised and killed the targeted cell in a matter of minutes.

Ciara also tested an artificial melittin, made chemically, which eliminated the need to sacrifice many bees. It too was effective in killing breast cancer cells.

Because the melittin forms holes in cancer cell membranes, Ciara wanted to test if it were possible to enhance the ability of other anti-cancer drugs to enter cancer cells.

To explore this, she injected melittin alongside the chemotherapy drug docetaxel into triple-negative breast cancers.

This combination was significantly more effective in reducing tumour growth compared to either melittin or docetaxel alone.

While it is still only early days these findings suggest that honeybee venom, and in particular the melittin it contains, might help us to develop better, targeted treatment for breast cancers.

A remarkable piece of research by one of Perth’s best and brightest former students.

Twenty-four hours before that discovery was released to the world two Perth cardiologists, Dr Mark Nidorf and Professor Peter Thompson, who is also the Deputy Director of the Harry Perkins Institute of Medical Research, made an entirely different but no less impactful announcement.

They had been leading the world’s largest trial of a drug typically used to treat gout to see if it could reduce the risk of heart attack and stroke in patients with a build-up of plaque in their arteries.

For 16 years, Dr Nidorf had been interested in the potential effects of the gout drug, colchicine on his patients who were at risk of heart attack, stroke, bypass surgery and stenting.

The risks they carried were despite taking very effective treatments like aspirin and statins.

He wanted to know if it were possible to bridge that treatment gap using the old, safe anti-inflammatory drug, colchicine.

He’d had a patient with a very serious condition who had responded remarkably to colchicine and it peaked his curiosity further about whether this drug could be effective for other patients.

First Dr Nidorf conducted a trial with his own patients with stable coronary disease, looking for those with evidence of inflammation and found colchicine had a profound effect on patients with those inflammatory markers.

That led to the much larger trial, double blind and placebo controlled, with Professor Thompson and a Dutch team that involved 5500 patients, nearly half from Perth.

The findings were published in the New England Journal of Medicine.

It revealed that the risk of heart attacks and the need for coronary stenting or bypass surgery reduced by 30% in patients taking low dose colchicine.

What is exciting about this research is that we now have an old drug that is widely available and inexpensive and safe and well tolerated and out of patent, so will remain inexpensive, that is likely to form a cornerstone treatment, along with aspirin and statins, for the management of patients with chronic coronary disease.