A bit of French inspiration has paid off for Patrick and Emma Parnier in their King Street ventures, as Russell Quinn reports. 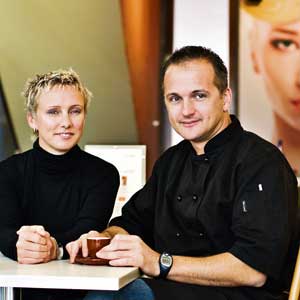 THE husband-and-wife team behind the only licensed alfresco eatery on the fashionable King Street promenade haven't done things the quick and easy way, but instead have taken their time to get it right.

For the past five years, Patrick and Emma Parnier have been overseeing the development of their French-inspired, street-side cafe at 49 King Street, Etro Bistro.

Adding to the challenge is the fact that they've concurrently finalised the construction and licensing of a private cocktail bar located upstairs from their bistro late last year, Etro Bar.

Mr Parnier is a classically trained chef with French publican parents while Mrs Parnier is an experienced human resources manager.

Mr Parnier, who describes himself as the aggressive one and his wife as the calm one, is very thankful for his partner's attention to detail.

"If somebody bought this business tomorrow, they buy a business totally by the book, ready to roll.

"So we are very happy now. Ok, the economy is going down but because we opened the roof at the right time as the economy goes down, our business has gone up."

Mrs Parnier is adamant that the roof of the cafe and its magnificent view of the city skyline was the main motivator for buying the business.

"The roof was part of why we bought the place in the first place because it had great potential," she says.

"But it's taken us two years longer than we first hoped, two-and-a-half years actually."

After opening the bistro doors in December 2004, the couple liaised with lawyers, determining the best course of action for properly licensing both venues.

Mr Parnier says a small bar licence was required for private functions upstairs and a restaurant licence for the bistro downstairs.

"To reopen the laneway and the alfresco, it's on crown land, so this took us three years to reopen up with the liquor licensing to be able to have a glass of wine with your meal," he says.

Construction of the patio-style roof for the cocktail bar was the only licensing condition imposed by the local council.

This was completed in line with the street's heritage values (another stumbling block) in November last year, just in time to launch the Etro Bar's maiden summer season, which delivered great results.

The couple decided not to open the bar to the general public, citing safety issues surrounding Northbridge and the CBD as a powerful detractor to the opportunity.

Instead, they included a self-imposed condition on the licence, ensuring the venue remained private.

"You don't want to deal with the Friday and Saturday night crowd around this area," Mr Parnier says.

"We realise we have lots of lawyers, bankers and lots of people who want a private function and to be safe.

"At the end of the day it was sound business decision to make it a bit VIP if you like, upmarket, cocktail parties."

Bar Etro can currently cater for 50 people but the Parniers, through the use of a consultant, have plans to increase that to 80.

And they've introduced an unusual initiative - loyalty programs for food (as well as the usual free coffee cards), which have proved popular.

"It doesn't matter if you're a plumber or the CEO of a company, they're all looking for value for money."