It is easy to trust a patissiere that has an accent as thick as Christian Martineau. 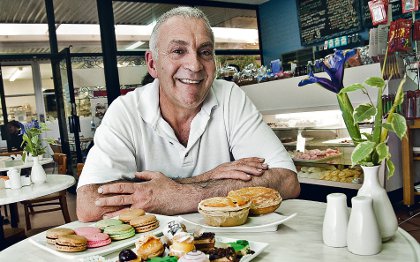 ALWAYS QUALITY: Christian Martineau has been making his french wares out of his Nedlands patisserie since 1987. Photo: Grant Currall

It is easy to trust a patissiere that has an accent as thick as Christian Martineau.

He has been making his French wares out of his Nedlands patisserie Martineaus since 1987, but the years have not taken the shine off his French lilt, it is as authentic as the petit fours coming out of his kitchen.

Mr Martineau explains that when he opened the first Martineaus shop, converting a deli on Stirling Highway, down the road from his current unassuming shopping centre home, French pastries were not at the top of most Australians’ shopping lists.

“It was very difficult. I bought an old deli shop, it was a disgusting, dirty old deli,” he says.

“The first day I think I made five fruit tarts, and slowly and slowly that increased.”

He had planned to lure passersby into the shop by placing his sweets in the window, a trick that worked and the days of making five tarts a day are well and truly over.

“People are coming from everywhere now,” he says.

These days he has a loyal following and sends cakes to the eastern states.

His raspberry flan was a favourite in the early days, so much so that he started producing the flans for Dome cafe.

“I made these flans for Dome cafe, when it started, because I was good friends with Patria Jafferies,” he says.

Mr Martineau says the business has developed on a word of mouth basis and he has shied away from marketing in order to lessen the blow of copycat patisseries.

In the days of the raspberry flans, he says he could not believe how many businesses wanted to replicate his recipe.

He steered away from commercial production, in order to preserve his own store’s niche.

“I do some places now, but for a friend with a business who wants a good quality cake but I don’t want this, because the business is like a different shell if you are doing more production and production means less quality,” he says.

“In my view, it is better to run the business properly, with quality and you do well. If you are going to do something you need to do it well and you need to love it.”

His private cake catering days began before this, when he was still in the original store next to the Windsor cinemas.

“The first Christmas in the shop, the shop looked horrible and I had no money to fix it. I made three croquembouche (a conical cake made of profiteroles with a lace toffee covering) and put them in the window,” he remembers.

“One politician saw this and said he wanted one for Christmas for his family.”

From there Mr Martineau has established a name for himself in making cakes for occasions.

For all the raspberry flans and croquembouche though, the Martineaus signature product is still the sweet petit four; not that this was intentional.

“That is the signature for me. I was the first in Perth to make the sweet petit four, but it was by accident. About 23 years ago Liz Davenport, the fashion designer, she wanted some petit four,” he says.

“I made them the French way, which I hadn’t done here before, everyone loved them so much, it started like that.

Mr Martineau says establishing the business as one of the best in Perth has been all about the quality of goods used and he still sources much of his ingredients from France.

“People ask me where the best patisserie is, and there are only one or two, because a lot use pre-mix. For me this is very disappointing,” he says.

“When you use good quality you make good products.”

Mr Martineau has been loath to stray outside of authentic French products, but said he eventually succumbed to the demand for the good old-fashioned Aussie favourite – the meat pie.

“Now people come from everywhere for the pies. There is never enough,” he says.

He still holds on to his Loire Valley roots and follows the development of food in France in order to continue developing the Martineaus patisserie style.

The biggest lesson Mr Martineau has learnt through his career came from a chef in a two Michelin-star Paris restaurant, where he spent the early days of his career.

“One night he said to me, ‘you always need to be the first person arriving and the last person leaving’ and it is true,” he says.

Given that, 24 years on from opening the business he still starts at 4am and closes the business at 5:30pm, at a guess he has taken that advice on board.