A couple of well-connected hospitality players are convinced they can win over Perth foodies with their contemporary spin on an international classic. 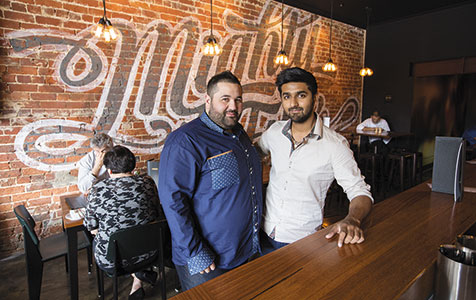 Whatever subtlety The Meatball Bar lacks in its name it more than makes up for on its menu, with owners Giovanni Pezzano and Badri Gosavi’s passion for the cross-cultural staple clearly evident at their Leederville establishment.

Both men have strong hospitality backgrounds; Mr Pezzano is focused on wholesale produce while Mr Gosavi’s family is behind the 2 Fat Indians restaurants in Cottesloe and Highgate, and the Bollywood restaurant at Innaloo.

The idea for The Meatball Bar emerged when Mr Gosavi paid a visit to the Pezzano household and was served polenta meatballs for dinner.

“He just fell in love with it,” Mr Pezzano says of Mr Gosavi’s reaction to his mother’s food.

“There is so much you can do with meatballs,” Mr Pezzano told Business News.

Rather opportunistically, another meatball fan, renowned Perth chef Ivan Mather, had just left his role as head chef at South Perth’s Coco’s when Messrs Pezzano and Gosavi were formulating the idea for the restaurant, and was quickly welcomed into the fold.

Rather than a bar, as the name would suggest, the venue is a restaurant first and foremost with the menu offering a range of meatball inspired dishes – from tapas-style ‘reinventions’ (falafel balls with saffron aioli) to fully fledged spaghetti and meatballs.

A similar concept called The Meatball & Wine Bar has been taking off in Melbourne, with three outlets having opened in two years.

Mr Gosavi said that success was a promising sign for the Perth iteration, despite it having a different focus.

“Obviously that concept has worked over there, so it’s potentially a sign of good things to come for us.”“Their meals are very heavy, very substantial meat-based dishes,” Mr Gosavi said.

Those positive signs are evident in the Meatball Bar’s strong first couple of weeks in business, which has reinforced the owners’ plans to expand across Perth, with negotiations already well advanced for a second outlet.

The Meatball Bar joins a host of eateries along Newcastle and Oxford streets in Leederville, which Mr Pezzano said was the attraction of the venue located beside Jus Burgers.

“But there was a gap in the market, and we thought that Ivan – with his background – would just fill that void.”

It hasn’t been an easy start, however, as the failure to secure a liquor licence in time for the opening means they’re missing out on profits.

The pair has opted to apply for a restaurant licence, rather than a small bar licence, due to indications the latter would take longer to secure.

Even so, they’re estimating it will be another four months before the restaurant licence comes through.

In the meantime, customers are able to bring their own alcohol with no corkage fee.

VERSATILE: Meatballs may be the focus, but there's plenty of variety.

While the lack of a liquor licence is a negative, Mr Pezzano said it allowed them to truly focus on their point of difference.

“At the end of the day it’s the ambience, the service and the food that separates everyone in the market,” he said.

“From a revenue perspective it’s a hurdle, but it has also helped us.”