Diana Quan hopes her new Northbridge cafe will live up to its name. Russell Quinn reports. 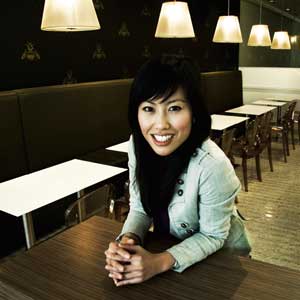 NEW DIRECTION: Diana Quan has left pharmacy to open Milk and Honey, which has been seven years in the planning. Photos: David Bradley

HARD work and patience has paid off for Diana Quan, who despite enduring legal battles and numerous delays has spent the past seven years planning, designing, building and fitting-out her cafe in Northbridge.

Milk and Honey is Ms Quan's first real foray into the hospitality industry in Western Australia, having cut her teeth as a nine-year-old when, on occasion, she would operate the cash register in her parent's bakery.

The 25 year old has come a long way since then, albeit a world away from anything related to the service of food and beverage.

"Until a year ago I was a pharmacist," Ms Quan told Gusto.

"My parents have been in the food industry for quite a while, and they're getting older and all they want to do is spend time with their grandson.

"So I thought I would put my stuff aside for a while and give mum and dad a hand."

Ms Quan's parents, Linh Tran and Van Can Quan, bought the building at 82 James Street seven years ago for $1.75 million, and despite spending most of her time studying and working as a pharmacist, Ms Quan's dream was always to open a vibrant, colourful cafe with her parents.

"It started off being a relatively simple job. We bought this property and thought we would just refurbish it, lease it (upstairs) out to some office people, and open a café," she says.

"It's quite simple when you say it like that but we had many troubles with the builder and because of that it started to get very complicated.

After disputes with the original builder, which led to excessive legal costs and significant delays, Ms Quan is adamant that employing the right team of people is vital to getting the job done properly the first time.

"We had a very good team towards the end; at the beginning it was really difficult, but towards the end we had a lot of real good people to help it all along," she says.

Ms Quan spent about $650,000 on the renovations to the café, getting it just the way she wanted.

This is a real reflection of me, this whole cafe - the food, the music, the decor, everything.''

Chairs the colour of milk and honey were sourced from Italy, the rich brown fabric along the back of the booths came from France, and the bumble-bee wallpaper along the cafe's feature wall was discovered in Scotland.

At the heart of the project was an aim to raise the profile of Northbridge, which Ms Quan feels has received too much bad press.

"I think Northbridge has a bad reputation it doesn't deserve - it's actually a very vibrant, cultural centre," she says.

"We bought this property and really liked Northbridge and wanted to do something really nice for the area and bring people into the area.

"We don't want to cut anyone's lunch, really; we wanted to stand out but at the same time we didn't want to share anyone's business.

"We wanted to bring more people into the area rather than talking half of anyone else's customers."

And the inspiration behind the name?

"I was shopping for a body shampoo and saw a brand with a milk and honey flavour. I thought that would be a great name for a cafe," Ms Quan said.