Panels no cure-all for planning problems

Town of Cambridge mayor Simon Withers says the impact of Development Assessment Panels would be improved if developers could choose whether to use them or go straight to local councils. 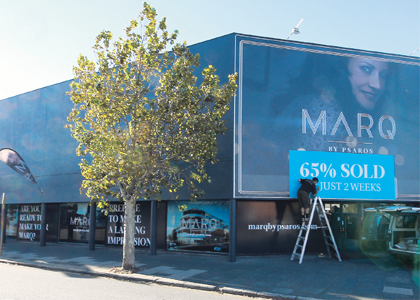 NEW DEVELOPMENT: An apartment project is proceeding at 110 Cambridge Street, but only after an earlier proposal was rejected. Photo: Bohdan Warchomij

Town of Cambridge mayor Simon Withers says the impact of Development Assessment Panels would be improved if developers could choose whether to use them or go straight to local councils.

THE state government’s Development Assessment Panels have boosted Western Australia’s ranking on a national planning league, but the DAPs haven’t proved to be the planning panacea their advocates were seeking.

Launched in July 2011, the state’s 15 DAPs have attracted criticism from a number of local councils, notably the City of Subiaco, which claim the panels sideline it from important planning decisions.

But they have also attracted criticism from developers and other councils, which have cited a number of ‘teething’ problems.

A case in point is C2 Property Group, which worked with the Town of Cambridge for eight months to develop its five-storey apartment proposal for 110 Cambridge Street, only to have the project rejected by the DAP last year.

The Town of Cambridge endorsed the plan but the opinions of its two representatives on the assessment panel weren’t enough to sway the other three panel members, and ultimately the proposal was knocked back.

The landowner at 110 Cambridge Street responded by appointing Psaros Property Group as the new developer to the site, leaving C2 high and dry with a costly bill for a project that will never see the light of day.

Cambridge Mayor Simon Withers claims this is a prime example of how the assessment panels work against good councils.

He said councils spent decades mapping out planning policies but these documents had no standing in the assessment panels.

And he said the voice of the two council representatives on the panel was not sufficiently influential to sway the vote.

“It’s pretty clear that non-council members regard the council development policies as nonbinding on the DAP,” Mr Withers said.

Mr Withers’ solution is a system where developers choose whether to take their development application to an assessment panel or a local council.

“This would sort out the councils that are obstructive and anti-development because they will just be bypassed,” Mr Withers said.

“Putting a development through a well-run council is far superior to going through a DAP.

“DAPs were brought in to deal with the bad councils and as a result they have brought every council down to the same level.

“I fully appreciate there are a number of councils out there making it difficult for developers and DAPs should be used to bypass them, but the councils with a good track record for approving projects, developers should be allowed to choose to deal with those councils if they want to.”

The Property Council of Australia is the driving force behind the national Development Assessment Report Card, which ranks Australian cities in terms of their planning systems.

The WA arm of the council is a vocal supporter of the panels, which it holds up as a vital plank in the reform of the state’s planning processes.

The property council’s deputy executive director, Lino Iacomella, said the panels were performing exactly as was intended by providing an independent assessment process that was consistent across WA.

“Developers of large projects now have the certainty that their development applications will be expertly determined according to the existing local planning policies throughout the state,” Mr Iacomella told WA Business News.

However, he said the panels relied on existing local planning schemes, which was an area that needed more reform.

“Not all local planning schemes are up to date or in line with broader state planning policies,” Mr Iacomella said.

“The DAP process could be further improved if all local authorities regularly reviewed and updated their local schemes.”

Jason Willoughby was one of the key proponents of C2’s apartment project for the 110 Cambridge Street site, which was skittled by the DAP’s rejection.

Despite this experience he still supports the concept of independent assessment panels but warns they can’t supplant a strong, forward-looking local council.

“From a community perspective I think the DAPs are a good system,” Mr Willoughby said.

He said the assessment panels were vital for Perth’s western suburbs, where the opposition to higher density was totally at odds with the government’s planning policy, Directions 2031.

“I have just worked on a paper for the Property Council and the Greens, which highlighted activity corridors like Stirling Highway and Cambridge Street for four or five-storey development in Perth,” Mr Willoughby said.

“It just seems as soon as you get into the western suburbs it’s a real problem.”

The City of Subiaco is understood to be pursing legal action in a bid to overturn a State Administrative Tribunal decision to allow the construction of Blackburne’s four-storey Westgate project on the corner of Bagot and Railway roads in Subiaco.

It’s just one example of the conflict between local councils and the assessment panels, but points a larger issue for these leafy locales.

But equally he said you couldn’t mothball a suburb and expect it to thrive and prosper.

“The risk is, if you don’t allow any development, things will get to a point - which is where we are now I believe - where we have to make change and things will be forced through,” Mr Willoughby said.

“Instead of local action groups just saying no, they should be more flexible and help in guiding what type of development goes there because what they’ll get is what they don’t want.

“Where we have major infrastructure like railway and roads, we need to have more people there with higher density; but just in certain locations, not everywhere.

“And the beachfront; how many thousands of kilometres of beachfront do we have in WA (that we can’t) pinch one portion for some type of high density.”