Ros Worthington says she is the richest person in the world, without a worldly possession. 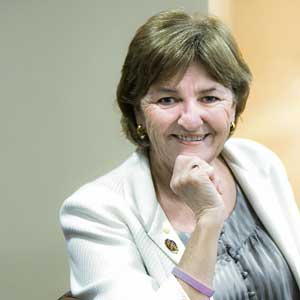 WHEN local philanthropist Ros Worthington invited the boss of an adults-only product retailer onto the board of the Breast Cancer Foundation of Western Australia, eyebrows were raised.

When Malcolm Day, of Adultshop.com, was promoted to chair the foundation, the phones started ringing.

"One lady absolutely tore me to shreds for using someone like Malcolm Day and Adultshop.com and taking their money that was absolutely filthy," Ms Worthington, the founder of the foundation, recalls.

"She questioned how my conscience could do that? I said to the lady, 'Very easy. If that's filthy money to you, I'm quite happy to take the dirty money and use it for good.'"

Ms Worthington, 57, has forged a very public persona by doing good. She has helped raise millions of dollars for charitable causes and received numerous accolades, including the Medal of the Order of Australia. She is on the speaking tour, has a publicist and will write a book about it all when she gets a few moments to herself.

She describes herself as the richest person in the world, albeit without a worldly possession. But her lack of possessions is more a matter of circumstance than choice, after losing everything when her husband took his life seven years ago.

"I've only just in the last two months come out of the huge black hole of debt because it's taken me that long to pay that debt," Ms Worthington says.

"It was suggested that I go bankrupt, but it just didn't sit with me to do it, and I'm glad today that I can sit back and say I didn't go bankrupt and I've paid all that debt off. That's an integrity thing for me."

Ms Worthington is not averse to talking about the pain of her past. Her public profile sent out to media outlets details a history of traumas, from being abused as a child to her struggles with breast disease.

Her favourite saying is "turn your pain into power" and she says she will use her story if it can help.

Ms Worthington speaks regularly about doing good deeds (coupled with the right motivation) and as follower of the Buddhist faith, she views much of life's events through the law of karma.

"What I love about my karma is that I get so much that it's too much for me so I push it on and it flows to everyone else around me," she says.

Now that Ms Worthington has emerged from the "black hole of debt", she has no desire to stop earning, with the speaking tour the most obvious source of income. She says she has realised that personal wealth is not a bad thing, as it opens up great opportunities to serve.

And the money that flows into her charitable ventures will continue to come from controversial avenues, just so long as it comes. Adultshop.com recently raised more than $100,000 for the Breast Cancer Foundation.

"I ask you, am I going to say no to that because that's my relationship with Malcolm Day and Adult Shop. I don't have any problems in that way. If it's someone who knows me and if I can use that to my advantage to get funding for one of my causes. I'd be a bloody fool not to, wouldn't I?

Philanthropy is giving of the heart, and if you take it in that context then I'm very happy to receive that accolade. Accolades don't sit with me. I do get embarrassed. But I've learned to accept it because I don't want people to think I'm not appreciative. I guess it's the humility in me, I do get embarrassed by all of that, but at the same time I'm very astute and I'm very aware that it opens wonderful doors for me and my causes.

Is the work of a philanthropist tiring?

The first person at the beginning of the day and the last person in the night before I go to sleep is me. I put myself first. By putting myself first, it allows me to help so many other people.

Have you considered writing a book?

I've been asked to write my book for about five years now, and I keep saying, 'I don't have bloody time, wait til I'm 60, because I've got too many things to do'.