As a man of letters, it seems Ken Clements is pretty good at writing them, too. 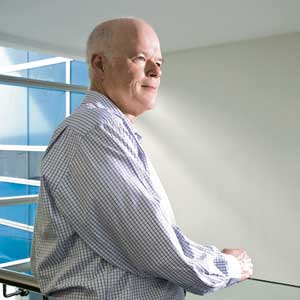 "I'm pleased I wasn't in the category of old farts," says the director of UWA's Centre for Economic Research, upon being reminded of the recollections of those who knew him in the 1980s.

"Old institutions do have their own traditions. For a long, long time Perth was very isolated. All those sorts of things probably, I was going to say conspired but that's the wrong word, probably could account for the old traditions."

Professor Clements was born in Melbourne, studied at Monash University, and went on to complete a PhD in international monetary economics on a scholarship at the revered University of Chicago.

The academic career of his wife, Professor Izan HY Izan, has followed a similar path - from Melbourne to Chicago to Perth. She is now the deputy dean of the UWA Business School.

"At that time it was the leading university of economics in the world. I took lectures from the leading lights," Professor Clements says.

"Friedman was not only a leading economist but a leading public figure. He was probably the most influential economist of the last 100 years."

To those unaware of the ins and outs of monetary economics, Mr Friedman is widely remembered as a critic of government intervention and a supporter of private enterprise.He once said, "The government solution to a problem is usually as bad as the problem."

When WA Business News made reference to the so-called 'Chicago Boys' - a term used to describe Chilean economic advisers schooled at the University of Chicago who advised General Pinochet - the reply was succinct.

Professor Clements appears comfortable in his corporate-influenced surrounds, with the new $50 million UWA Business School sporting the logos of 'principal partners' such as BHP Billiton and Woodside.

Many of the lecture theatres and tutorial rooms are named after business leaders and companies, contributors to the $25 million fundraising program.

"That's how business schools need to work. We have academic skills which are of interest to business and government. It's a productive sort of a mix," Professor Clements says.

Professor Clements was raising money from industry before it became widely practiced.

He was writing letters to industry and government to fund-raise for the annual PhD Conference in Economics and Business - which aids the training of promising doctoral students - two decades ago.

"I've got to write a lot of letters. I get a lot of rejections too when I ask people for money," Professor Clements says.

He says his strike rate is about one acceptance for every 10 to 20 letters sent out.

"I made it into an after dinner speech once where I spoke about some of the best reasons I have received, that is the worst reasons, for not giving the conference money."

One company wrote: "This is a fabulous idea. It's obviously of national importance. It's too big for us. Try head office."

Professor Clements says his students enjoy learning the complex curriculum by relating it to local and international events, such as interest rate movements or the financial crisis.

"The real-world problems become brilliant vehicles for explaining advanced analytical economic concepts," he says. "Students become engaged by the relevance of theory to understanding what is occurring in the world around them and start to appreciate its usefulness to their future careers."

He has supervised 60 honours/masters dissertations, three masters theses and 16 PhD students, and says many of these 79 students now occupy high-level positions in academia, business and government.

Professor Clements describes himself as a generalist economist, with an array of interests ranging from analysing the way the consumer price index is calculated to ... marijuana.

"In recent years I've been working on the economics of drugs, illicit drugs, marijuana in particular," he says.

"If you tax alcohol more heavily and make it more expensive, there's a tendancy for alcohol to grow less rapidly and marijuana more rapidly. Some consumers switch."

He says those involved in the Henry Review - a comprehensive review of the Australian tax system - should read his book, Economics and Marijuana.

"Here's one way to plug up the federal budget deficit, legalised tax marijuana."

How has the relationship between universities and business changed since you were a student?

"Universities are probably closer to business now than they used to be because, in some cases, the pressures of funding, but I see that as a good thing. That's a healthy development in my view."

Is the Australian press financially literate?

"In Australia, economics gets a pretty good run, to the point where elections are won and lost on economics. We have iron ore prices making page one of The West. There's tremendous public interest in economics in Australia, and always has been."

What are some of the most amusing reasons groups have given for not helping fund the PHD conference?

"It's a bit libellous, so I can't tell you exactly what was said. Speaking broadly, one state treasury official said they couldn't possibly fund the conference because they had an explicit policy of only hiring people from ... South Australia, I mean their state