Twenty-somethings with a pretty face have nothing on the baby boomers, says real estate and recruitment entrepreneur, Kathy Dunlop. 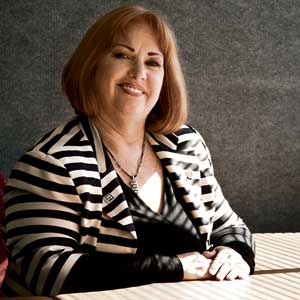 IS it better to hire a baby boomer re-entering the workforce, or a 20-something who can potentially contribute far more years to the growth of your organisation?

"I'm sorry, but that's how it is," she tells this 29-year-old representative of WA Business News.

Slightly uncomfortable after that response, this journalist asks whether this belief holds true in her specialty field of recruiting for the real estate industry.

"This time last year they were hiring 18-year-old receptionists on 50k a year who didn't have any idea what they were doing. But as long as they had a pretty face they were getting the jobs," Ms Dunlop says.

"Now they want more mature people with good job skills to come back.

"We are seeing a lot of baby boomers wanting to come back, needing to come back for financial reasons because they lost half their share portfolio in the recession. Even if a baby boomer needs to work from home or part-time, they can do more in three days than a gen y can do in six days."

As a recruiter and real estate business owner with 30 years' experience, Ms Dunlop is well placed to comment on the qualities sought by employers.

A native of Bremer Bay, Ms Dunlop entered the real estate industry in the late 1970s.

"Working in real estate is fabulous for a woman because once you are qualified it can take you all over the world," Ms Dunlop says. "I've recently come back from Dubai setting up real estate agencies for the government over there."

After noticing realtors were always on the lookout for suitably qualified staff, she opened a real estate-focused recruitment agency in the early 1980s, which was the first in the state.

"Real estate recruitment had never been done in Perth at that time, so it grew out of a need," Ms Dunlop says.

Almost three decades on - and several overseas business projects later - Ms Dunlop is back in Perth, heading the NPP Group of Companies that includes the real estate-focused NPP Recruitment.

Former News Corporation executive, Keith Bales, was recently brought on board as managing director of the recruitment division.

The firm's clientele includes those forced back into work after losing substantial sums on the share market, and/or after being badly advised.

Ms Dunlop says NPP also provides training to the property industry, helping to identify areas of growth and find the personnel to exploit that potential.

"We train our clients to get the best. They don't necessarily get the best by putting their jobs on Seek. CEOs and chairmen get recruited in a different way. They will come and see a recruiter like us with experience that they can trust," she says.

"Then we set up appointments, coffees and things like that. The big thing is the out-of-hours networking; the y generation doesn't do that, they want to go on the computer and go on Facebook or go on email, but that's not how you get a CEO."

Recruiters tend to make anywhere from about $6,000 for a low-level appointment, up to $40,000 for a high-ranking executive, or more if it's an overseas candidate.

Ms Dunlop has, by her own description, a strong personality.

The entrepreneur, who also owns the King Street Food and Wine cafe, made it known she wasn't pleased when the coffee her receptionist provided for this journalist didn't come from her cafe. And a plate overflowing with biscuits led to further rebuke.

It is with that up-front personality Ms Dunlop at first survived, and then thrived, in the aggressive world of real estate, often negotiating on male-dominated business deals.

She appears unfazed by the current economic slump, having seen worse conditions in the property sector in the 1980s.

"With a lot of hard work and determination everyone will come through this as well," Ms Dunlop says.

"I've been through three recessions. In the early recession of the 1980s Custom Credit was 28 per cent interest, so this is actually quite good."

She advises local real estate agents to concentrate on building their "passive income" from ongoing property management fees, to get them through tough property cycles.

From multi-million dollar real estate properties to coffees sold for a couple of dollars, Ms Dunlop understands there is money to be made at all levels.

While expensive properties have not been exchanging hands at the same frequency they did during the boom, she says there's still plenty of life at the lower end of the market.

"In all business, small fish are sweet," Ms Dunlop says.

Do you prefer working in real estate or in recruitment?

I like them both, but a real estate person is seven days a week, 24 hours a day. Recruitment is typically 8:30am to 5pm, Monday to Friday, except for after-hours networking. They are both people businesses. One's selling a house, the other is selling a body, in many ways, but I don't want to be crude about it.

Do you think real estate agents suffer from an image problem?

They get a bad image because they deserve it a lot of the time. I don't associate with people like that. I believe in karma. I believe if you look after people nicely you will be rewarded; that's what I live by.

What is the most important quality for a recruiter to have?

To be caring. And you have to like your job and make sure there is a good fit between the worker and employer.

How were you received in your several overseas business postings?

Most companies worldwide really enjoy employing Australian staff because we have some of the best qualified in the world, particularly in property, and particularly in WA. In WA our rules and regulations [in the property industry] are quite strenuous and onerous compared to the other states.