Blackstone Minerals has unearthed a slew of platinum group metal credits amongst its nickel drill results that could redefine its Ta Khoa project. The company recently reported a 45.5m drill intersection grading 1.2% nickel with a surprising 0.35 grams per tonne platinum, palladium plus gold that could potentially redefine the economics of the company’s nickel project in Vietnam. 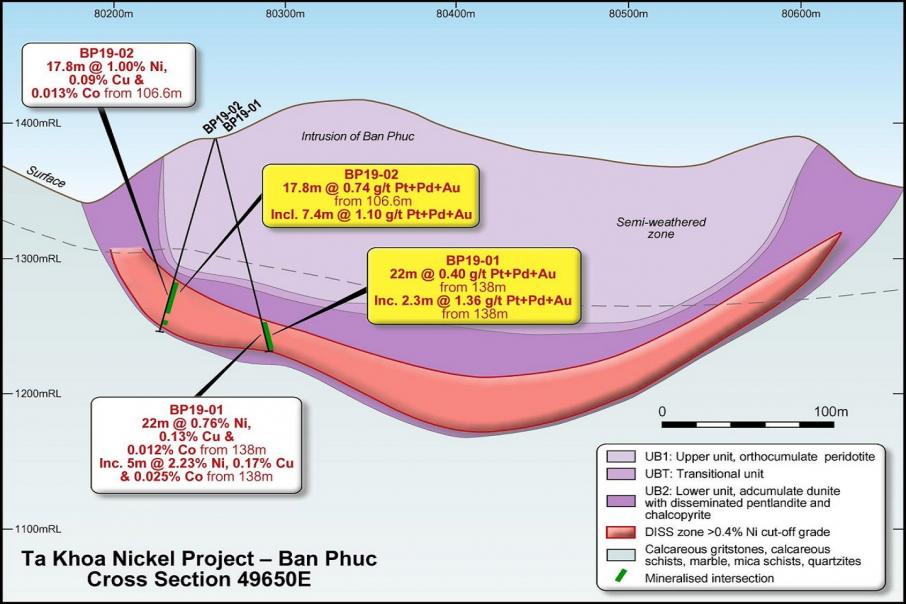 ASX-listed multi-commodity explorer, Blackstone Minerals, has unveiled a wide 45.5m drill hit grading 1.2% nickel at its Ta Khoa project in Vietnam that was peppered with platinum, palladium and gold credits. According to the company, the new results just might redefine the economics of the project.

Ta Khoa is located 160km west of Hanoi in the Son La Province of Vietnam and is host to the relatively modern Ban Phuc nickel mine and processing facility, which is currently sitting idle on care and maintenance.

The 45.5m nickel drill hit also threw up some other mineral credits including 0.17% copper and 0.01% cobalt in addition to the potentially game-changing 0.35 g/t platinum, palladium plus gold assays from 56.5 metres down-hole.

The next move for Blackstone will include further drilling at the Ban Phuc project within a 5-kilometre radius of the existing processing facility. The company’s key aim is to deliver a maiden mineral resource around the Ban Phuc disseminated sulphide zone in the next few months.

Modern mineral exploration in the region has really only spanned about 22 years to 2018, with the Ban Phuc massive sulphide zones mined from 2013 to 2016.

The massive sulphide zone itself is an extraordinary 640m in length and is known to extend at least another 450 metres at an average width of 1.3 metres.

Asia’s ever-increasing demand for lithium to power its battery industry places Blackstone in an advantageous position. With the potential to develop downstream nickel and cobalt processing infrastructure in Vietnam, the project’s full potential is yet to be fully realised.

In May 2019, Blackstone announced an option to acquire 90% of the Ta Khoa project and has since completed an induced polarisation geophysical survey that generated upwards of 25 new massive sulphide zones and several new disseminated sulphide zone targets.

The emergence of platinum group element credits at this project may well impact its economics in time, particularly if Blackstone can continuously produce these encouraging numbers over time.