Ounce to the tonne soils in PNG for Geopacific

Geopacific Resources has discovered some seriously high grade gold and copper anomalies from soil sampling at its Woodlark project in PNG. Samples of up to 32g/t gold and 1.4% copper were returned from soils across several mineralised corridors in the southern region. At Loluai, soil values peaked at 0.56% copper and 0.79g/t gold, whilst at Norac, soil values peaked at 0.97% copper in a 3 square kilometre corridor. 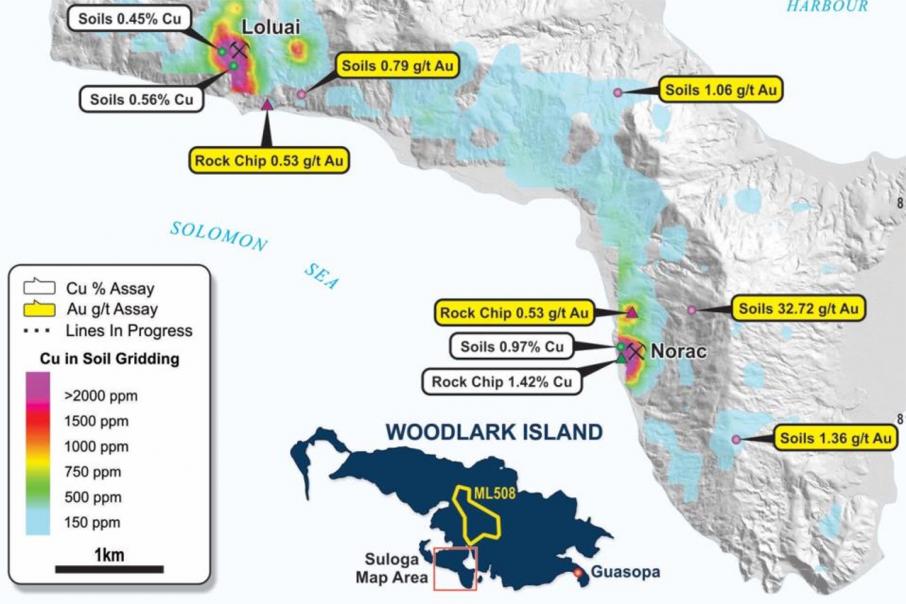 ASX listed Geopacific Resources has reported some serious gold grades up to 32 grams per tonne gold and 1.4% copper from regional geochemical soil sampling programs undertaken in the southern region of Woodlark Island in PNG.

The new results are centred about 8km southwest of the Woodlark King gold deposit and validate Geopacific’s belief in the possibility of regional scale gold and copper mineralisation, well beyond the limits of the main ore deposits already defined on Woodlark Island.

The stunning results follow up a set of high grade gold anomalies from the eastern region of the island that were announced earlier this month.

Soil sampling across the southern region encountered a gold-in-soil anomalism up an ounce to the tonne gold, with observable argillic clay alteration, which can sometimes signify nearby porphyry copper mineralisation.

According to the company, some of the results around the historical mining centres at Loluai and Norac were also particularly encouraging and demonstrate unusually high gold and copper grades for soil sampling programs.

At Loluai, the soil copper anomalisms extend over 800m of strike north-south, peaking at values of 0.56% and 0.45%, whilst soil gold anomalisms peaked at 0.79g/t gold.

Geopacific said the current soil results confirm and extend that historic copper anomaly and further work will now be undertaken to infill the anomalies prior to any drilling being undertaken.

At Norac, the company discovered strong copper values in rock chips and soil samples, peaking at 1.42% copper and 0.97% copper respectively over an area of 3 square kilometres.

Rock chips and soil anomalies with elevated gold were also located at Norac and although historical reports mention limited scale gold mining in the area, no production results have been found by the company.

Geopacific Managing Director Ron Heeks said: “Soil results of up to 32g/t gold are orders of magnitude higher than we hoped. In addition, the gold in soil results are further supported by several cohesive copper anomalies of over 800m long. These anomalies are associated with the types of rocks known to form substantial mineral deposits.”

“Copper mineralisation was first identified by explorers in the 1960’s, with exploration confined to a limited area. This soil survey is the first widescale evaluation of the southern region to target the extent of the copper zones.”

Geopacific has previously reported an Exploration Target at Woodlark Island of 5 million ounces of gold.

The soil sampling program will also extend into the northern region of the island, where Geopacific holds the entire area within a granted exploration licence.

The company is also undertaking diamond drilling on selected aeromagnetic targets located between the Kulumadau and Busai gold deposits.