The state’s craft beer industry is going from strength to strength, but some of the oldest brewers still dominate the scene. 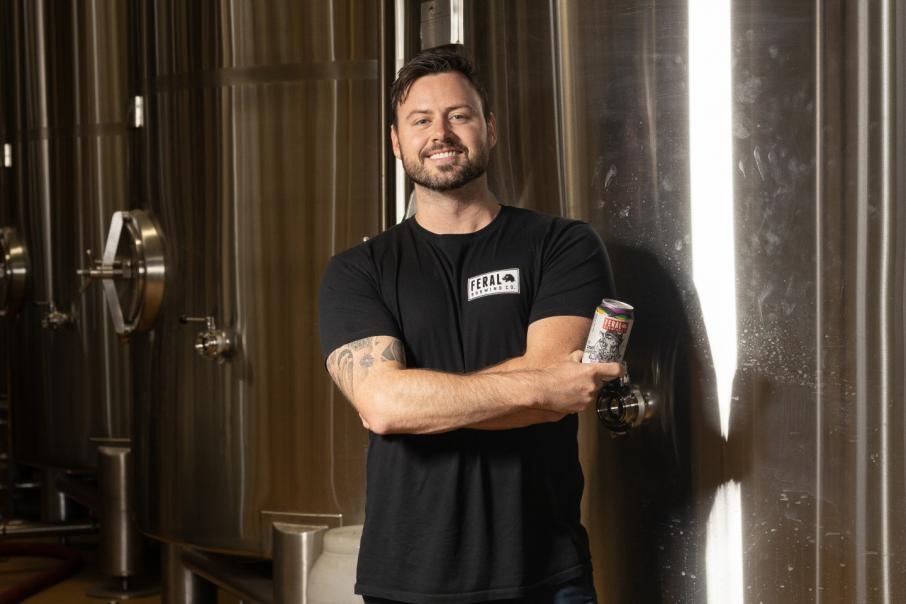 The term ‘craft beer’ wasn’t used in Australia when Nail Brewing’s John Stallwood started out in the business.

That’s despite Western Australia having led the craft beer charge with the opening of the Sail & Anchor in Fremantle in 1984.

Back then, beers of the type produced in Freo were known by a more high-end, top-shelf moniker, far from the earthy, crafty appeal of today’s creations.

Mr Stallwood began selling his brews in 2000 from Bobby Dazzler’s at the corner of Murray and Williams streets in the Perth CBD, competing for market share with giants Carlton & United Breweries and Lion Nathan.

“Back then it was two big breweries that were powerful, and they still are today, but craft beer wasn’t,” Mr Stallwood told Business News.

“The name craft beer didn’t actually exist, it was called ‘boutique beer’ back then.

“Everyone drank lager, no-one really knew anything about craft beer.”

He said the growth of the market was spurred on by Fremantle’s hosting of the America’s Cup in 1987, which brought a lot of international beers to the port city’s bars.

According to website Craft Beer Reviewer, 86 breweries opened nationwide between 1984 and 2000, while 37 closed.

In WA, Business News’ Data & Insights lists 13 breweries that opened during that time period that remain in operation in 2021.

Along with Nail Brewing, several well-known breweries opened in 2000, including Little Creatures, which was sold to Lion Nathan in 2012, and Duckstein Brewery.

The Craft Beer Reviewer said annual brewery openings doubled between 2001 and 2004, with an average of nine opening each year.

In 2005, 22 breweries were established in Australia, including Gage Roads Brewing Company, now called Good Drinks, which has become WA’s largest brewery, ranked by production capacity, according to Data & Insights.

Good Drinks managing director John Hoedemaker said the craft beer industry was in its infancy when he started the brewery.

“Everyone was doing the same thing, which was creating interesting craft beers with stronger hop characters and different malt characteristics, and basically trying to sell that up against lager,” Mr Hoedemaker told Business News.

“That’s what the business was all about 18 years ago, which was convincing all consumers of Australia that there was something better than lager, give it a crack, see what you like and don’t like; that’s how our business grew.

“The biggest change nowadays is that the craft beer market has grown strongly, and as a business we are no longer trying to get consumers to swap from lager to craft beer, but we are now starting to compete with all the other craft beer brewers in the country.”

From 2014 to 2016, Craft Beer Reviewer calculated the average rate of openings to be around 68 per year nationally, with only seven breweries closing.

Data & Insights lists about 100 active breweries in WA, 32 of which started in the past five years.

Several WA breweries have closed in recent years, including The Monk in 2020, Albany Brewing Co and Blue Mile Brewery in 2019, and Brew 42 in 2018.

A majority of the top 10 were established in the early 2000s, with the notable exceptions of Blasta Brewing Company (2018) and Otherside Brewing Co (2016).

Feral Brewing Co, which started in 2002 as a brewpub in the Swan Valley, is now the state’s second largest brewery.

It teamed up with Nail Brewing in 2012 to buy a shared production facility and was purchased by Coca-Cola Amatil in 2017.

General manager Rob Brajkovich said Carlton United & Breweries and Lion Nathan had the contracts to supply most of the tap points in venues as recently as a decade ago.

Now, he said, venues were a lot more likely to choose WA beers, given the growing number of local breweries to choose from.

“I’m finding venues are more open to keeping more of their tap points flexible to cater for that local offering or consumers ‘changing tastes, knowing that’s what they are looking for,” Mr Brajkovich said.

Feral’s beers had changed as people’s tastes evolved, he added.

Mr Brajkovich said Feral White beer had launched the business and the brand, but now that product contributed just 3 per cent of sales.

The release of its Hop Hog beer in 2008 was a gamechanger for the business, as it won several awards and contributed significantly to brand recognition.

Mr Brajkovich said the commercial release of canned Biggie Juice in 2019 was another defining moment for the brand.

“One of our most popular products is a product called Biggie Juice, which is a New England IPA so it’s a hazy beer,” he said.

“We only conceptualised and brought that product to market 18-20 months ago and that’s become our biggest seller,” he said.

Mr Brajkovich said the growing competition between craft brewers in recent years had encouraged producers to find a point of difference.

“It’s good, it pushes everyone to keep driving quality, looking for unique styles or offerings or flavours to bring to market, because unfortunately not everyone can be on every shelf,” he said.

“With craft, though, we feel like there is space for all of us and where we would probably rather get our volume from is actually getting drinkers into craft who aren’t already in it.” 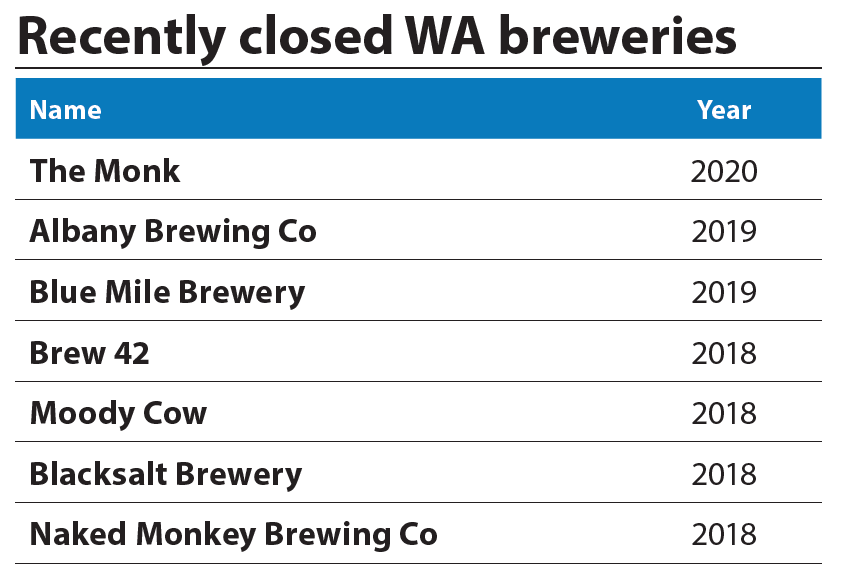 Nail Brewing’s Mr Stallwood said the company made a profit for the first time in its history last year.

“All that time we have struggled financially because growing a brewery costs a lot of money,” he said.

“After 20 years, last financial year Nail’s volumes lifted quite a lot and I finally started to make a profit.”

Mr Stallwood said he planned to use the brewery’s recent financial success to invest in the company and expand but was yet to plan his next move.

Feral’s Mr Brajkovich said recent growth had led the company to upgrade and expand elements of the brewery.

He said the brewery was getting six new fermenters, upgrading its boiler and installing a centrifuge to increase brewing capability.

Feral was also considering new locations for a hospitality venue in the long term.

“We just think that potentially there’s a little bit of a disconnect between where the brand is now in market; on tap at festivals, in your bottle shops and what it represents compared to where we started,” Mr Brajkovich said.

“So, we think there’s an opportunity to get a CBD or CBD fringe venue and get more people through and interacting with the brand.”

Good Drinks is planning to open several new venues over the next few years.

The ASX-listed brewer announced plans to open a flagship hospitality venue at the historic A Shed building at Victoria Quay mid last year.

The venue will include a working brewery, restaurant, bar and an alfresco area with a children’s playground, with plans to open for next summer.

Mr Hoedemaker said the company was designing and planning the venue and was expecting to start construction towards the end of February or early March.

He said the fitout was estimated to cost between $6 million and $10 million.

“That will most likely be a venue that supports the Matso’s brand and we would like to see Matso’s be a brand that’s synonymous with the northern parts of Australia,” he said.

A Good Drinks venue on Sydney’s Northern Beaches was also on the cards, Mr Hoedemaker said.

Another big change for the brewer in recent months has been its name.

Known for years as Gage Roads Brewing Company, the change to Good Drinks was made in in November last year.

Mr Hoedemaker said the management team made the decision as the company acquired more drink brands, including Matso’s and San Miguel.

“We wanted to change our business name from Gage Roads to Good Drinks, so we became a house of brands rather than a brand, being Gage Roads, controlling or owning all these other sub brands,” he said.

Mr Hoedemaker said the company’s half yearly results had vindicated the decision to manage a portfolio of brands.

“We have had a strong first half of the year and we are expecting to have a very strong full year for our business,” he said. 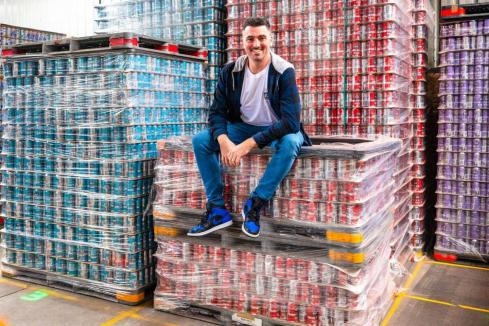