Ore sorting could be the panacea for conglomerate gold projects that are notoriously hard to drill after Novo Resources reported positive results from trials on bulk samples from its Comet Well conglomerate gold project near Karratha. The company said that ore sorting rejected up to 99.7% of the waste materials, with visual and X-ray examination of the ore concentrates showing gold nuggets, providing encouraging feedback from the trials. 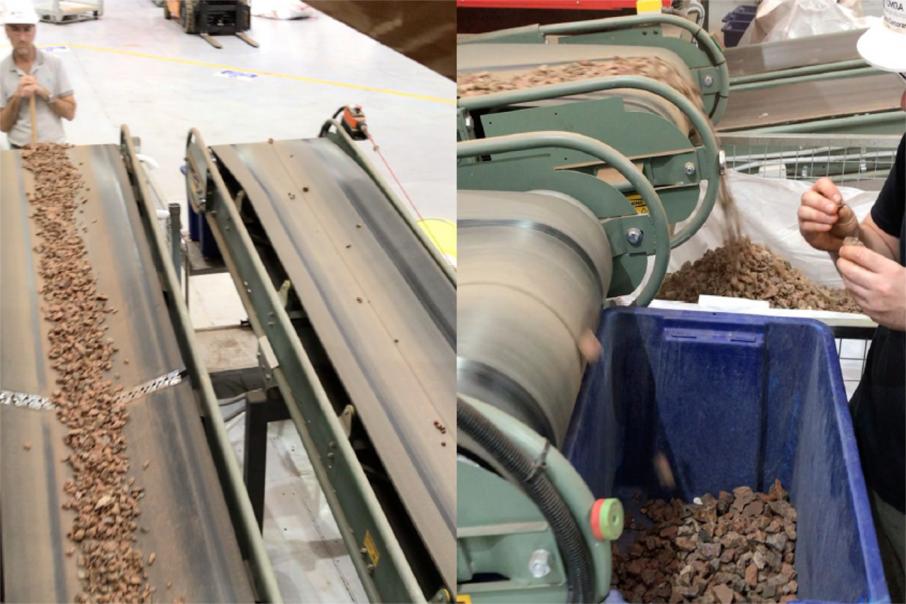 Ore sorting could be the panacea for conglomerate gold projects that are notoriously hard to drill after Novo Resources reported positive results from trials on bulk samples from its Comet Well project.

The company used a combination of X-Ray transmission or “XRT” sorting and electromagnetic induction or “EM” sorting to mechanically separate ore-bearing rock particles from waste materials.

Samples were crushed to certain size fractions and then run though a conveyor system using proprietary TOMRA sorting technology and separated based on their high density and electrical chargeability.

The process can therefore split samples containing gold from waste rock, based on gold’s characteristic high atomic mass and ease of electrical conductivity, particularly in the form of gold nuggets which are replete at Comet Well.

Novo reported a remarkably low mass pull of only 0.3% in the rock samples between 10mm to 63mm fraction size, which effectively means that the sorting process rejected 99.7% of the crushed material as waste at that size.

A visual and X-ray examination of the concentrate material indicated the presence of gold nuggets, providing excellent initial feedback that the rock sorting trials had proved successful.

The company said that samples larger than 63mm in size were too coarse for XRT to adequately penetrate for efficient sorting and therefore crushing below this size will be required for effective mechanical sorting.

According to Novo, TOMRA is the foremost mechanical rock sorting company in the mining industry and the Norwegian multinational corporation is a world-leader in the field of instrumental design for recycling and processing in the food, waste and metal salvaging industries.

This expertise has now extended into the mining industry, where the technology uses sensors based on the physical properties of ore and waste including colour, mass, transparency, magnetic and electrical conductivity to assist in subdividing suitably sized material streams.

Novo Resources’ CEO Rob Humphryson said: “The highly nuggety mineralisation at Karratha has proven to be a challenge with respect to assaying, but it may prove to be a benefit with respect to metallurgical recovery of gold.”

“We see additional value being created by the use of mechanical sorting at Karratha, Egina and perhaps other Novo gold projects in the Pilbara.”

Moreover, Novo says that mechanical ore sorting could be a potential game-changer in the future advancement and development of its sizeable conglomerate gold holdings in the Pilbara, adding significant value.

The truth diviner will be the suite of assay results to be returned shortly from the separated ore and waste fractions generated by the sorting trials.

Only then will the company be able to ascertain the capability of this technology to potentially fast-track the mechanical separation of crushed ore concentrates from it conglomerate-hosted deposits.

Whilst conglomerates can be tricky to drill given their nuggety nature, the very thing that makes them tricky to drill – the nuggets – could turn out to be the panacea for this potentially lucrative industry that is yet to really take hold in Western Australia.